Get our email!
Search
metro 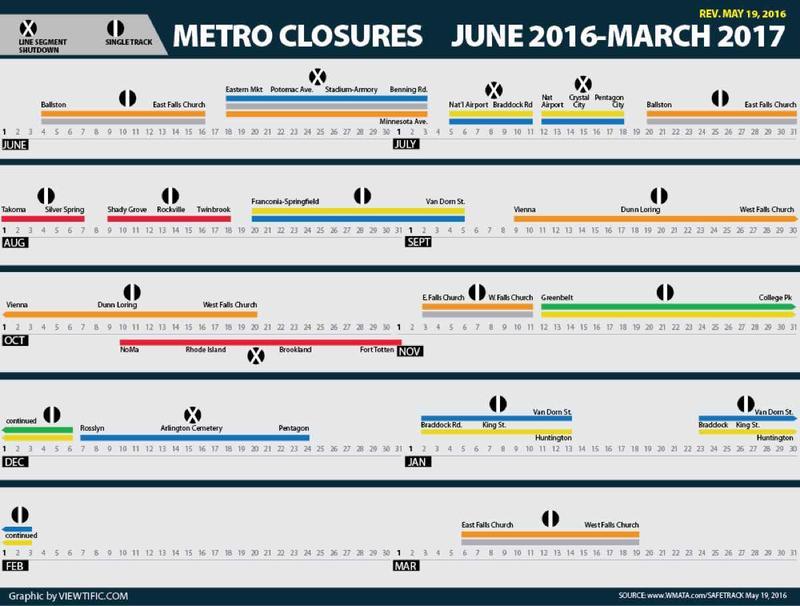 “Metro General Manager/CEO Paul J. Wiedefeld today announced that the first SafeTrack “surge” between Ballston and East Falls Church is ahead of schedule in many categories of planned work, including rail tie replacement, insulator renewal, fastener renewal and leak repairs. As of the end of the day Monday, June 13 — 77 percent of the way through the project — 96 percent of the planned work had been completed.”

“The District Department of Transportation (DDOT) today announced record ridership on Capital Bikeshare during the first week of WMATA’s SafeTrack repair campaign. Capital Bikeshare had 89,436 users last week. That is 6% higher than the previous record week established during Bike to work Week in May of 2015.

The spike in ridership coincides with the introduction of a new single-trip fare allowing residents, visitors and commuters to take single bike trips of up to 30 minutes on Capital Bikeshare for just $2. Since the launch of the new initiative on June 4, 2016, single-trip fare usage has more than doubled from approximately 600 to more than 1,300 trips daily.

Beginning this Saturday, June 18 until closing, Sunday, July 3, the Orange and Silver Line will be shut down between Eastern Market & Minnesota Ave/Benning Rd. There will also be no Blue Line service between Arlington Cemetery and Rosslyn.

• Orange Line trains between Vienna and Eastern Market and between Minnesota Ave and New Carrollton will operate every 10-12 minutes.

• Silver Line trains between Wiehle-Reston East and Eastern Market and between Benning Rd and Largo Town Center will operate every 10-12 minutes.

• Blue Line trains will run every 12 minutes until 10:00 p.m. between Franconia-Springfield and Arlington Cemetery only.

• No rail or bus service between Arlington Cemetery and Rosslyn during peak hours; travel via L’Enfant Plaza instead

**NOTE** Free shuttle bus service will replace trains from Eastern Market to Minnesota Ave/Benning Rd and will operate every 5-10 minutes. Shuttle buses may be extremely crowded and customers may need to wait for multiple buses due to long lines. Metro riders who have the ability to do so should consider alternate travel options and avoid traveling during rush hour if possible. All customers traveling through the shutdown zone will tap out and back in on either side of the bus bridge – customers will be charged as a single continuous trip.

• Benning Road – Silver Line shuttle buses will replace trains and operate every 5-10 minutes between Benning Road, Stadium-Armory, Potomac Ave, and Eastern Market. Buses stop ONLY at the affected Metrorail stations, not at stops along the way. No express buses will operate. Consider using Metrobus 96, 97 to Union Station or DC Streetcar H/Benning Line as an alternate.

Read more →
More Stories
More Beer Garden News – The Brig – “It is a go” Friday at 4pm!!“details on the city’s first ParasolShare program”