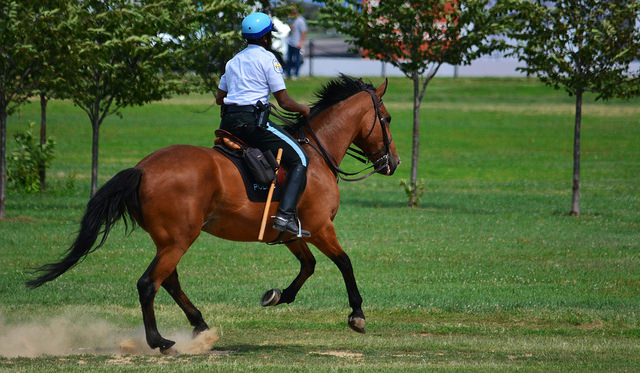 I know we have some lawyers & at least one cop on this blog and hoping they can give advice for police encounters. Today I witnessed a sad and disturbing encounter with US Park Police this afternoon – 2:30 pm. in Meridian Hill Park. Walking my dog, ordinary day, saw 3 cops investigating the bathrooms, then strolling around. The usual homeless guys sleeping on benches, nannies with babies, joggers etc.

But then the cops clustered around a couple on a blanket and things got crazy. Accusing them of pot smoking – said someone had called in a report – yeah right. The couple was completely compliant and non-confrontational. They let the cops search their bags, let them see they did indeed have one joint in a Tupperware container. The cops bullied and escalated things beyond any sensible level. “have you ever been arrested?” “Are you sure?”

I’ve lived over 30 years in Columbia Heights – I know when people are being obnoxious or belligerent. This couple was totally non-confrontational. And there was absolutely NO smell of pot anywhere near them! This was absolutely clearly a case of police belligerence.

The woman was dark-skinned, the man sort of gimpy/freaky, maybe gay – but everything about this encounter was just slightly below any measure of certifiable wrong – not exactly racist, not exactly sexist, not exactly homophobic, not exactly jacket-up muscle white-boys, but clearly all of the above. The cops were absolutely goading them to get an arrest. Two of them at least were totally jacked up and hyper. Like crazy hyper – idiot giggling kind of hyper – It was horrible to witness.

I just stood there – a 58 year old white woman with gray hair and a puppy-looking dog. I asked them what the charges were and they said they would arrest me for obstruction if I kept asking. Seriously, we can not accept a police state with arbitrary powers. If I were a 23 year old black man with dreads and a pit bull, I’m sure I would be in jail right now.

When more cops showed up for transport, they were aggressive and sarcastic and really horrible.

Me: What exactly are the charges?

Cop: Have you ever been a cop?

Me: I don’t think that question is relevant. I’m a citizen.

Cop: How long have you been a citizen?

Cop: Ha! (then lots of mumbling/shouting with the other officers.)

They took the woman away in handcuffs – not exactly brutality – but pretty rough.

One of the cops sort of asked if I would like to make a statement and I said I would, but then they wouldn’t actually take it. They told me to contact their supervior – a Ltn. Mims – but none of them would give me their names.

This is wrong. All wrong. We can not accept a police state with unstable individuals allowed arbitrary powers of arrest at whim.

The real question is about how one should deal with police encounters. What are your rights when they ask if they can search your bag, your person? Do they need to give you a reason? If you are not involved but standing, just watching, in a public space, can they tell you to back up 20 feet? Get off the sidewalk?”