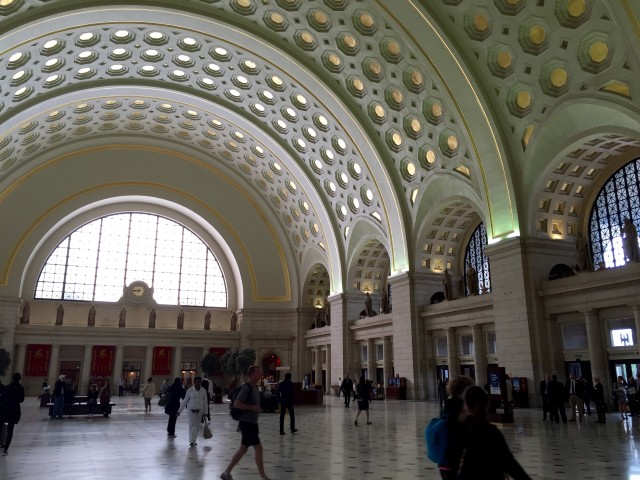 “Today, Washington Union Station reveals a restored, historic Main Hall. Covered for the past four years in scaffolding as rehabilitation work was underway, the historic space is now unobstructed, as originally designed, for the first time in almost 50 years.

Opened in 1907 as the General Waiting Room of the station, the Main Hall was well known for its impressive scale, stretching 219 feet by 120 feet, with a ceiling height of 96 feet, and grand gold-coffered ceiling. Historically lined with mahogany benches, the Main Hall functioned as large open space until the 1940’s. The onset of World War II resulted in increased traffic at the station, and ticket counters were expanded from the West Hall into the Main Hall, to accommodate the demand. In the 1970’s as train travel declined, and air travel became more popular, ideas to reactivate the grand space were evaluated.

The search for a new use resulted in repointing the station as a National Visitor Center in honor of the Nation’s bicentennial. Again, the Main Hall was reconfigured, this time to accommodate a Primary Audi-Visual Experience (PAVE). Sunken in the center of the floor, the PAVE featured a wall of slide show monitors that flashed scenes of Washington. Unpopular, and failing to draw in visitors, the PAVE was closed in 1985, along with the rest of the station, for a full-restoration. In 1988 the station was re-opened, with the Center Café prominently positioned in the Main Hall, and additional retail introduced to ensure the station’s long-term economic independence.

In 2011, an earthquake struck Virginia, and damage to the station needed to be evaluated, igniting a larger discussion amongst station stakeholders and historic agencies on the Main Hall’s preservation and historic restoration.

In 2012, work began on restoring the damaged ceiling, including the installation of an elaborate system of steel framing to provide a completely new and seismically sound support structure for the historic plaster ceiling. The entire ceiling bay was also repainted and new gold leafing applied, thanks largely to the National Trust for Historic Preservation, and its $350,000 corporate donation from American Express to Union Station. The grant assisted USRC in re-gilding the ceiling inside the Main Hall by aiding in the replacement of more than the 120,000 sheets of 23-karat gold leaf.

In addition to all the work on the ceiling itself, the heating and air-conditioning systems in the attic, behind the ceiling, were greatly improved by realigning ductwork and creating new connections to the ceiling diffusers that will allow them to be cleaned and serviced regularly in the future. In April, once the ceiling restoration was completed, deconstruction began on the center café, and two circular planters, which once served as fountains.

“Today, we are very excited to reveal a fully-restored Main Hall for the public to enjoy that is also consistent with the original design envisioned by the world-famous, station architect, Daniel Burnham. This is the first time in many of our lives where we can fully appreciate this space as it was historically designed.” said USRC President and CEO, Beverley Swaim-Staley. “This has been a milestone we have been working to achieve for almost four years, and we appreciate the assistance received from the Federal Railroad Administration, our leaseholder, Union Station Investco, an entity of Ashkenazy Acquisition Corporation, the State Historic Preservation Office, and other historic agencies that continue to support all we do here at Union Station.”

“Our civic spaces say a lot about our priorities and our values, and as the restoration of Union Station underscores, multimodal transportation is not just part of our past, but it is also central to our future. For the thousands of visitors to our nation’s capital who pass through Union Station every day – via trains, buses, cars, and more – the newly-restored Main Hall will serve to demonstrate the value of transportation that is accessible, open, and welcoming to everyone.” said Secretary Foxx, United States Department of Transportation.

“We are delighted by the return of the Main Hall to its original splendor and commend American Express for its leadership in helping support the stewardship of this National Treasure,” said Stephanie Meeks, President and CEO of the National Trust for Historic Preservation. “Continued dedication to holistic, preservation-based planning for Union Station’s future will ensure it moves into its second century with all the grace and grandeur it deserves, while serving as a fully modernized transportation hub and grand gateway to the Nation’s Capital.”