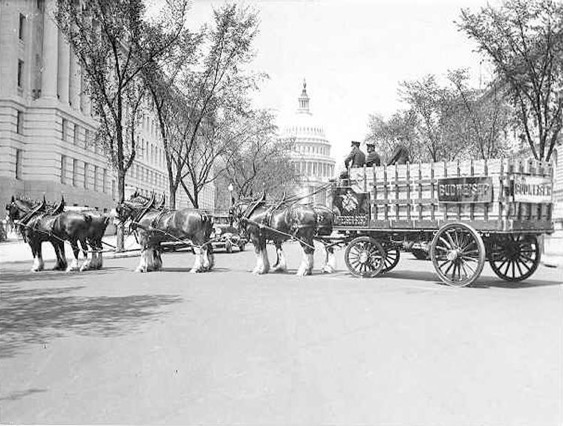 “The iconic Budweiser Clydesdales will visit the nation’s capital from Wednesday, April 6 until Sunday, April 10. While in town, the hitch team and red wagon will make appearances at D.C. landmarks including Nationals Park, the Verizon Center and the bustling Southwest Waterfront. Spot the Clydesdales? Use the hashtag #BudClydesdalesDoDC for the chance to win special prizes throughout the week.

During the five-day tour, beer fans will have an opportunity to catch the Clydesdales out and about in D.C. as they celebrate Anheuser-Busch’s new partnership with Nationals Park, Nats Opening Day, National Beer Day and a Washington Capitals home game. This April marks more than 80 years since a six-horse hitch of Budweiser Clydesdales visited Washington to deliver beer to President Franklin Roosevelt at the White House in honor of the repeal of Prohibition.

Wednesday, April 6: Cantina Marina outing (600 Water St. SW) — Washingtonians will get their first glimpse of a Budweiser Clydesdale at the famous southwest D.C. waterfront bar and grill from 5 to 7 p.m.
Wednesday, April 6: #BudClydesdalesDoDC Kick-Off Party at Duffy’s Irish Pub (2106 Vermont Ave NW) — The Clydesdales kick-off celebration will take place at Duffy’s from 6 to 8 pm during the Irish bar’s Nationals away game viewing party. The Clydesdales will be joined by Nats favorites The Racing Presidents as well as the NatPack.
Thursday, April 7: Nationals Opening Day (4:05 p.m.) + National Beer Day (1500 S Capitol St. SE) — Baseball fans will spend Opening Day with the Budweiser Clydesdales while the horses parade around the Park, hit center field for the national anthem and pose for photos at the stadium’s Budweiser Brew House.
Saturday, April 9: Stoney’s on P Street (1433 P St. NW) — One lucky Budweiser Clydesdale will spend the day interacting with fans from 1 to 3 p.m. Consumers can take photos and interact with the Clydesdale and handlers.
Sunday, April 10: Washington Capitals home game (601 F St. NW) — The Budweiser Clydesdales will end their tour of D.C. at the Verizon Center with a Capitals game. Fans can hang out with the horses from 5-7pm before they head back to the stables. Fans will also have the opportunity to take photos with the hitch team and red wagon.”