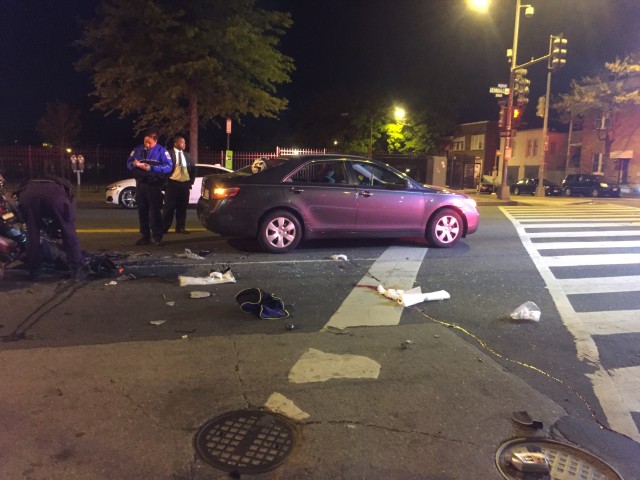 I’m trying to find some info on an accident victim.

There was a crash in front of my house late Wednesday/early Thursday, around 1am. A grey/silver moped rear-ended a car stopped at a red light at Georgia and Irving NW, across from Bruce Monroe park. He must have been going pretty fast. I heard the accident from my front bedroom and ran outside. A woman was already calling 911, but no one was assisting the man. I ran into the 77 shop on the corner there and asked for a clean cloth. They didn’t have one, supposedly. Maybe they didn’t understand what I was asking. They only offered me paper towels. I then ran back into my house to get a clean bath towel. The rider was laying in the middle of the street, bleeding profusely from his head. His helmet had come off on impact with the rear window of the car. I applied consistent pressure to the wound with the clean towel for about 10-15 minutes until the ambulance arrived. I kept talking to the man, trying to keep his eyes open, and keep him awake. He asked me repeatedly what my name was, and I told him. I couldn’t seem to get him to tell me his name, where he was going, or where he was coming from. He murmured at some point that his mother was in Colombia. His phone was dead (or possibly broken from impact) and because he landed on his head (twice) he may have had spinal trauma, so I didn’t want to move him to try and find his wallet.

The moral of the story is: hospitals are terrifying when you’re well. I can’t imagine what they must be like when you’ve been in a traumatic accident, and you’re unable to contact anyone to let them know you’re there. And English may not be your first language. And you’re alone.

I really just want to know if this man is okay.

Calling hospitals in the area has been fruitless, since I don’t know the man’s name, and “a moped accident victim late Wednesday night” seems to be the wrong information for the staff at the desk. Plus, privacy laws.

So, if anyone knows who this person was (hopefully still is) I would sleep a lot easier tonight if someone could confirm that he’s okay.

Read more →
More Stories
Peek inside the ‘Chinese Food Cantonese Style’ (and Dimsum) restaurant coming to Logan“These areas will serve as a safe place to exchange and complete transactions of online purchases.”