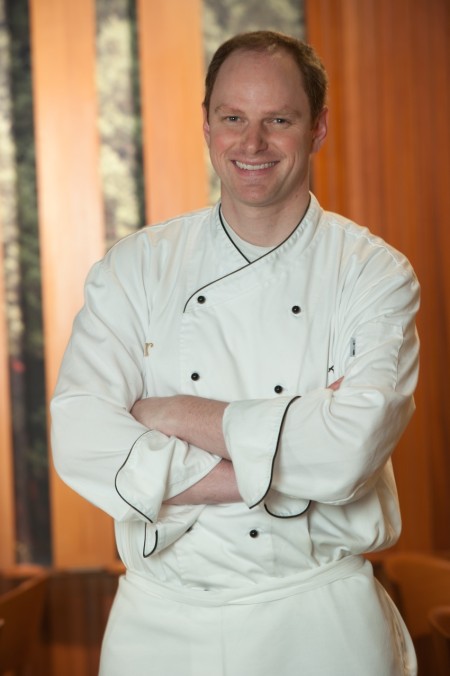 My good friend, Aaron McCloud, has been diagnosed with cancer. He was bothered by a persistent sore throat and finally went to see the doctor. Tests revealed that he had throat cancer that has metastasized into cancer in his back.

He is in Ann Arbor, Michigan where his mother lives, receiving treatment at the University of Michigan Medical Center.

Chef Aaron McCloud was most recently the executive chef at Clyde’s Willow Creek farm. Prior to that he made his mark on the DC dining scene as the innovative chef behind Cedar’s menu. You’ll recall that he created Cedar’s wild game menu. He was most creative as he shopped the Thursday FreshFarm Market’s Penn Quarter market and took his purchases back to the restaurant to create that evening’s dinner menu.

He was also the executive chef at the Inn at Perry Cabin and for The Vintage Restaurant Group.

Aaron became a chef in the most unlikely way – he was a child prodigy violinist who began performing at age four. One of his teenage jobs was as a violinist at the popular Michigan seafood restaurant. He liked what he saw and he asked the owner if he could work in the kitchen. He says the owner replied “What? You’re the kid who shows up in a suit and plays the violin.” But Aaron prevailed and took a job as a dishwasher. He told me that he would come home reeking of fish and never happier in his life. He convinced the chef to train him on the prep line. His big break came one Sunday when the brunch omelet maker didn’t show up for work. The chef said “Okay kid, you’re on”. And he never stopped cooking after that.

Those of us who know Aaron are devastated. But he’s young (37) and strong and we are confident he’ll fight this thing.”

If you are able please consider a donation here.