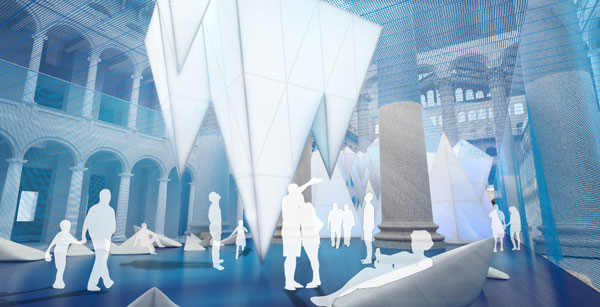 via the National Building Museum

ICEBERGS will feature installation elements in a variety of sizes and built of re-usable construction materials such as scaffolding and polycarbonate paneling, a material commonly used in building greenhouses. A “water line” suspended 20 feet high will bisect the vertical space, allowing panoramic views from high above the ocean surface and down below among the towering bergs. The tallest “bergy bit,” at 56 feet, will reach above the waterline to the third story balcony of the Museum. ICEBERGS will occupy a total area of 12,540 square feet.

Visitors will be able to ascend a viewing area inside the tallest berg, traverse an undersea bridge, relax among caves and grottos on the ocean floor, sample shaved-ice snacks, and participate in unique educational programming integrating landscape architecture, design, and the environment.

James Corner Field Operations is an urban design, landscape architecture, and public realm practice based in New York City and known for projects such as New York’s High Line and Santa Monica’s Tongva Park. The firm was commissioned by the National Building Museum to create the temporary summer exhibit following last year’s popular BEACH installation, a playful structure that welcomed over 180,000 visitors during its two month run.

“ICEBERGS invokes the surreal underwater-world of glacial ice fields,” said James Corner, founder and director of James Corner Field Operations. “Such a world is both beautiful and ominous given our current epoch of climate change, ice-melt, and rising seas. The installation creates an ambient field of texture, movement, and interaction, as in an unfolding landscape of multiples, distinct from a static, single object.”

“ICEBERGS symbolizes an extreme counterpoint to the sweltering heat of the Washington, D.C. summer,” said Chase W. Rynd, Hon. ASLA, executive director of the National Building Museum. “We hope that James Corner Field Operations’ striking design will provoke both serious public conversation about the complex relationship between design and landscape, while also eliciting a sense of wonder and play among visitors of all ages.”

TICKETS
Ticket prices for the run of ICEBERGS will be as follows and include admission to all other current Museum exhibitions. Admission is first come, first served (no timed entry). Tickets will be available online for members on June 15; non-members can purchase starting June 22. Group rates are available.

LATE NIGHTS
The Museum will offer special evening hours every Wednesday night of ICEBERGS’ run, featuring special activities for all ages, music and performances, and unique food and beverage offerings. Dates of Wednesday late nights are: July 6, July 13, July 20, July 27, August 3, August 10, August 17, August 24, and August 31. These ticketed after-hours events will be 6 to 10 pm. Tickets are required and will be available at go.nbm.org/ICEBERGS.”