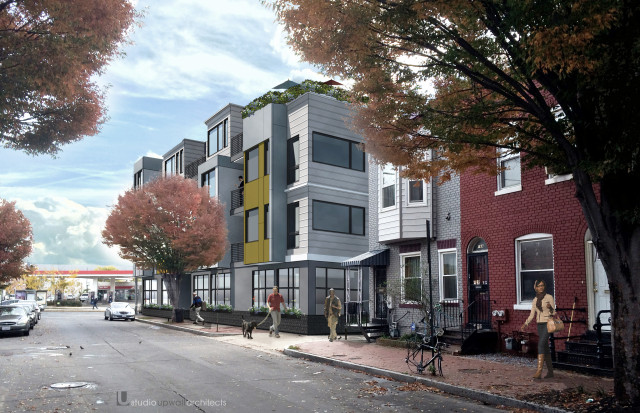 “Studio Upwall Architects partnered with two developers, Flywheel Development, and Urban Green LLC, in response to an RFP issued by the Deputy Mayor’s Office for Planning and Economic Development (DMPED) for a City-owned lot at North Capitol and Bates Streets in NW DC.

This RFP was issued as one of 4 sites in the “March Madness” round in early 2015. Our team’s concept, “Cyclehouse” proposed 15 units of affordable housing with a ground floor restaurant from Jaime Vargas, owner of San Antonio Grill in Brookland. The building would be designed to achieve Net Zero Energy use.

I’m happy to say that full ANC 5E voted to support a resolution in support of our bid Tuesday evening. In the run-up to the ANC vote we received unanimous support in a vote from the local civic association and a large majority of the votes at the single member ANC 5E-05 meeting.

a.) 15 apartments – 100% of the apartments are affordable units (aimed at 50-60% area median income)
b) Green design including Net Zero Energy target with high- efficiency building and roof-mounted solar
c.) Family-oriented restaurant + Neighborhood oriented retail space (aka: bicycle shop)
d.) Living wall, balconies, and roof deck amenities
e.) Bicycle oriented building to encourage cycling and alternative forms of transportation
f.) -Our design works with the scale of the neighborhood (4 stories, stepping down to 3 stories on the Bates side). The other team is proposing a 5 story building” 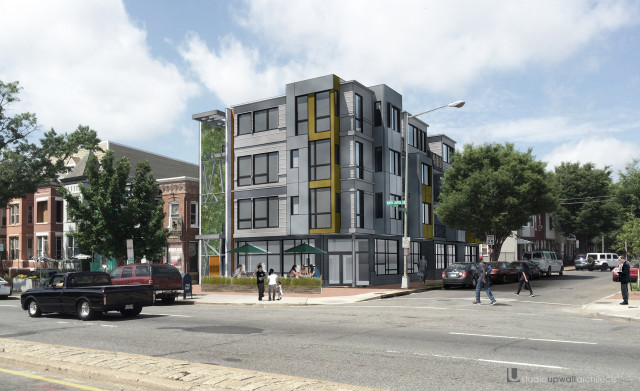