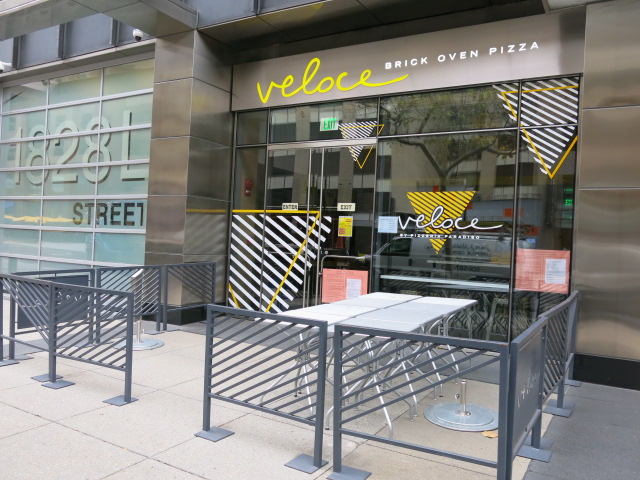 “Veloce will officially launch its beer program, offering a small selection of beers curated by beverage director Josh Fernands, starting next week. A selection of canned beers, and two beers on draft will be available: Ballast Point Sculpin IPA from San Diego, CA, and a local Farmhouse Ale style brew from Right Proper Brewing Company called Ornette. To celebrate the beer program launch, for the week of 11/2-11/6, Veloce will offer a special “Thor’s Right Proper Pizza” in honor of Right Proper co-owner Thor Cheston, which pairs with their farmhouse ale, and is made with chicken sausage, lemon, parsley, and sage pesto, pecorino cheese, kale, roasted onions, and roasted fennel.

Below are some additional beer events coming up at Pizzeria Paradiso:

Sour Beer Tap Takeover at Monday Night Beer Club: 11/2 Birreria Paradiso Georgetown.
At Birreria Paradiso in Georgetown, the theme for the monthly Monday Night Beer Club on 11/2, from 5:00 pm – 11:00 pm, the theme will be Sour Beers. They will be hosting the release of Sam Adams KMF 2015 alongside Sam Adams KMF 2014 and ten other sour beers, listed below, which will be on tap. Guests can enjoy half priced beers and the company of other beer lovers, who often bring rare bottles to share. While the bar is officially closed on Mondays, entry is available through the back entrance off Prospect Street.

More Stories
“At Bei Bei’s weigh-in yesterday he was 8.79 pounds!”What to do after “a mistake at the DC DMV Inspection Station that is prohibiting me from renewing my (now expired) vehicle registration.”