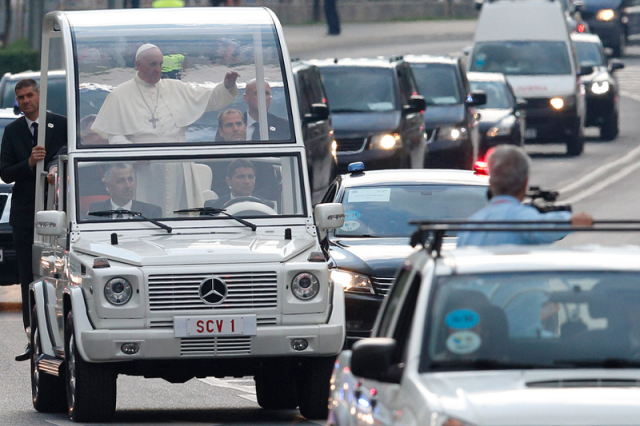 “The viewing area of the open motorcade route is free and open to the public. No tickets are required, however spectators will need to pass through security. Security gates will open for the Ellipse and the National Mall at 4:00 a.m. on September 23 and will close at 10:00 a.m. No one will be admitted into the area after that point in time. No food or drink may be brought in from the outside, but concessions will be available for purchase. Once inside the perimeter, attendees will not be allowed to leave and re-enter until the Holy Father’s Popemobile tour is complete.

Where is the location of the parade?

On Wednesday morning, September 23rd after leaving The White House, Pope Francis will travel along 15th Street, Constitution Avenue and 17th Street NW. Participants are invited to line the streets on the Ellipse and National Mall to cheer on Pope Francis as he drives by in the Popemobile.

Where can I see the Pope?
On Wednesday morning, September 23rd after leaving The White House, Pope Francis will travel along 15th Street, Constitution Avenue and 17th Street, NW in the Popemobile. People who wish to see the pope are invited to line the streets around the Ellipse and the National Mall to see Pope Francis as he drives by in the Popemobile.

What time does the parade take place?
The parade is scheduled to begin sometime around 11:00 AM.

Do I need a ticket?
No! Access to the viewing area will be on a first-come, first-served basis. While tickets are not needed, everyone will be required to go through security.

What time should people arrive?
Access to the viewing area will be on a first-come, first-serve basis. While tickets are not needed, everyone will be required to go through security. Gates to access the viewing area will open at 4:00 AM and will close at 10:00 AM. No one will be admitted into the area after that point in time. Once inside the perimeter, attendees will not be allowed to leave and re-enter.

What is the best way to get there?
People are encouraged to travel using public transportation. The closest Metro stops include: Farragut West, Farragut North, McPherson Square, Metro Center, Federal Triangle, and Smithsonian. All Metro stations are less than a mile from the event.

Can we bring in food and drinks?

Can we bring in signs and banners?

Participants are permitted to bring handheld flags, banners and signs, however, items supported by poles are not allowed.

What items are restricted for the Parade?
Aerosols, ammunition, animals other than service/guide animals, backpacks, bags and signs exceeding 8” x 6” x 4”; bicycles, balloons, chairs, coolers, drones and other unmanned aircraft systems (i.e., unmanned aerial vehicles), explosives, firearms, glass, thermal, or metal containers, large religious statues either stand-alone or on procession platforms, laser pointers, mace / pepper spray, packages, selfie sticks, structures (such as tents), supports for signs and placards, toy guns, umbrellas, weapons of any kind, any other items determined to be potential safety hazards will not be permitted. Surrendered items will not be returned, nor available for pick-up.

Is there anything happening after the parade?
Yes, there will be a jumbotron showing continuous live coverage, videos and commentary on Pope Francis after the parade, including his address to the U.S. bishops at the Cathedral of Saint Matthew the Apostle, and the Mass of Canonization for Blessed Junipero Serra later in the afternoon.