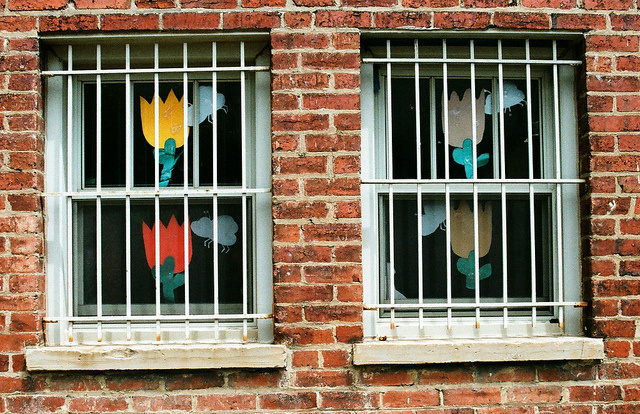 “Our house was burglarized yesterday at 9:36 am. The intruders climbed through a small alley-facing window into our carport and then kicked in our basement door. They took a 50″ TV and a laptop. Luckily, our alarm was set and they did not enter the main part of the house.

The security company immediately called the police, who arrived 7 minutes after the alarm went off. The thieves were long gone, but the DC police who arrived were professional and very thorough – from the K9 unit to the responding officers to the crime scene officer who pulled prints. With all the negative press for law enforcement lately, I just wanted to highlight our positive (well, as positive as it could be given the circumstances) experience with DC Police.

Unfortunately, we learned we were the third daytime burglary in the past couple of months in our particular alley. Neighbors noticed a suspicious black sedan with 2 men parked in the alley outside our house. If you live on the alley bordered by Rock Creek Church/Shepherd/Illinois/4th St NW, be sure to secure your basement entry points. All the burglaries involved kicking in a basement door, prying open a small basement window, or taking a basement door off its hinges.”

Another reader sends via email:

“Just a heads up for folks living in the Shaw area around 5th St & Q St, early this morning at 2.00AM I woke up to the sound of someone trying to break in to my back yard. I heard what seemed like metal being pounded by an object of some sort. We have a fairly tall 9ft roll up gate which would make it pretty difficult to break in but when I looked out from the window (our bedroom faces the back yard) I saw a guy with a flashlight trying to open our neighbor’s gate. I immediately called the MPD who responded in about 5 minutes. Two officers came through the alley on foot but the guy was gone by then. Please double check that you have locked your doors, people!”