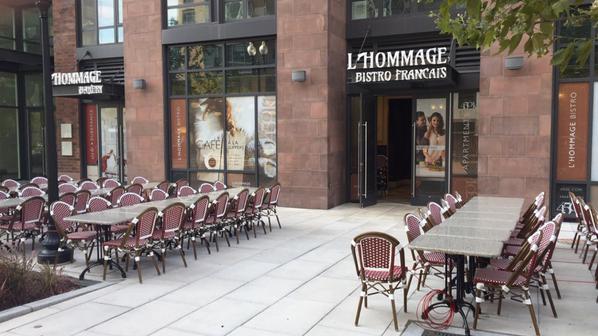 First look at the new menus for L’Hommage:

“Restaurateur Hakan Ilhan is pleased to announce his newest French restaurant venture, L’Hommage Bistro Francais, which will open in stages beginning in early September at 450 K Street, NW, within the Mount Vernon Triangle neighborhood. Those craving French pastries and freshly baked bread will want to stop in at the Boulangerie as it opens first on Friday, September 4th and will operate daily, from 7 a.m. to 8 p.m. serving breakfast options like house-made breakfast pastries, sandwiches for lunch, as well as coq au vin, boeuf bourguignon, cakes and patisseries to go, for those who’d like to enjoy their French meal at home. Then the 170-seat L’Hommage Bistro Francais’ main dining room and spacious bar will commence for dinner service on Friday, September 11th, and will be served Sunday through Thursday, from 5:30 p.m. to 11 p.m.; Friday and Saturday, from 5:30 p.m. to 12 Midnight. Lunch will debut Tuesday, September 15th and will be available weekdays from 11 a.m. to 3 p.m. with a late lunch offering available from 3 p.m. to 5:30 p.m. and weekend brunch will also become available in the near future.

Ilhan has tapped Executive Chef Joshua Laban Perkins to oversee the menu at L’Hommage. Perkins has worked at several Michelin-starred restaurants, and served as executive chef at Brasserie Le Coze in Atlanta, sister restaurant to Le Bernardin in New York City, where he worked closely under highly acclaimed chef Eric Ripert. In 2005, Perkins opened the Globe, a successful American contemporary bistro that was named “Restaurant of the Year” by Atlanta Magazine one year later. Under Perkins’ leadership, Globe received four stars from the Atlanta Journal-Constitution and was named one of Bon Appetit’s “Top Tables.” Prior to his appointment at L’Hommage, Perkins worked for two years as a chef at The Grove Grill in Memphis, Tennessee. During his tenure, he was named a “Top Three Chef” by Memphis Magazine, and the restaurant was awarded “Best Place to Lunch”, “Best Martini” and “Best Place to Hold a Business Dinner” by Memphis Flyer. Perkins will work alongside his Chef de Cuisine Taylor Pierce and Pastry Chef Nicole Shirley to showcase a menu that offers classic dishes that incorporate traditional cooking techniques that pay tribute to the true flavors and techniques of French cuisine.

Taylor Pierce has relocated to Washington to serve as chef de cuisine of L’Hommage. A native of Tennessee, he earned an associate’s degree in Culinary Arts, Culinary and Restaurant Management from L’École Culinaire in Memphis, Tennessee in 2012. After finishing at Mississippi State University in civil engineering, Pierce launched his culinary career in September 2012, in Memphis, as a line cook at Firebirds Wood Fired Grill, a popular hot spot serving classic American cuisine. Then in May 2013, Pierce worked his way up to serve as sous chef at Flight Restaurant and Wine Bar. Interested in exploring other cuisine styles, in March 2015, Pierce accepted a new position to work at Bluefin, in downtown Memphis. Bluefin is known for its Asian influenced “edge cuisine” and sushi. The opportunity to work in the kitchen with Perkins and to serve on the opening team at L’Hommage got the Tennessean to move to DC.

Newcomer Nicole Shirley brings over twelve years of experience as a pastry chef, baker and confectioner to her new role as pastry chef of L’Hommage Bistro Francais. She was tapped for this position in July 2015. Originally from Kingston, Jamaica, Shirley began her culinary training, taking courses at the Wilton School of Cake Decorating in Woodridge, Illinois and the Culinary Institute of America (CIA) in Hyde Park, NY in 2003. Then in 2005, Shirley opened her own gourmet cake and confectionary company, Nicole’s Sweet Temptations, Ltd., in Kingston, featuring her product line of signature items in a retail outlet and through her catering operation. Her wedding cake was featured in Martha Stewart’s Weddings Fall 2010 issue, which motivated her to hone her skills further in the world of desserts. Moving to Chicago, Illinois, in 2013, she earned her L’Art de la Pâtisserie from The French Pastry School, Chicago, that same year. She went on to work as a pastry chef instructor for Sur La Table’s in-store recreational culinary program from November 2013 to April 2015. Concurrently, she was also a pastry assistant for Chicago’s notable Le Sardine French bistro from January to May 2014. Next Shirley accepted the position of resident pastry chef and general manager for Veruca Chocolates. An artisan chocolate and confectionary company, in 2013, Veruca was ranked among the “Best Chocolates in the USA” by Food & Wine. Moving to the Washington, DC metro area in April 2015, Shirley served as assistant pastry chef at Amphora Bakery in Herndon, Virginia before joining the opening team at L’Hommage.

More Stories
Help Transport “The Beach” from the Building Museum to the Dupont UndergroundStreetcar Woes Vol. 1,082