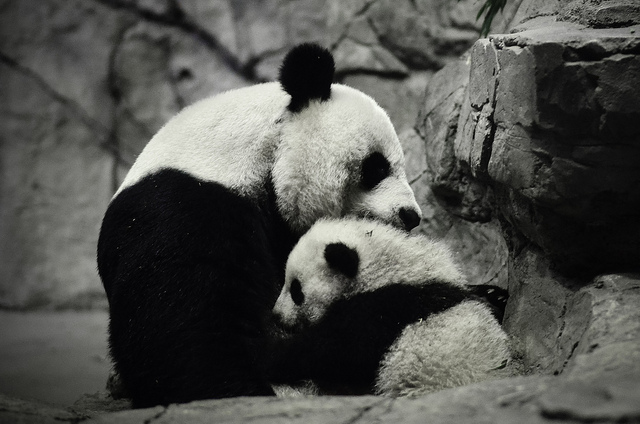 “Mei Xiang’s hormones are rising! She’ll have a cub or her pseudopregnancy will end in 30-50 days.”

More from an email:

“Smithsonian Conservation Biology Institute scientists have confirmed a secondary rise in giant panda Mei Xiang’s urinary progesterone levels. The slow rise started July 20 and indicates that she will either have a cub or experience the end of a pseudopregnancy within 30 to 50 days.

Our panda team has been monitoring Mei Xiang very closely since the procedures. Vets will continue regular ultrasounds as Mei Xiang chooses to participate in them. They are monitoring changes in her reproductive tract and evaluating for evidence of a fetus. The only way to definitively determine if a giant panda is pregnant is to detect a fetus on an ultrasound. Scientists will also continue to monitor her hormone levels through daily analyses. Don’t forget to follow @smithsonianzoo on Instagram for behind-the-scenes photos and videos with the hashtags #PandaStory and #InstaScience.

A female’s behavior and hormones mimic a pregnancy even if she is experiencing a pseudopregnancy. Giant panda fetuses do not start developing until the final weeks of gestation, making it difficult to determine if there is a pregnancy. It may still be too early to detect a fetus on an ultrasound.

Mei Xiang has begun exhibiting behaviors consistent with a rise in urinary progesterone. She is nest building, choosing to spend more time in her den, sleeping more and eating less.”

Read more →
More Stories
Man Shot in the Buttocks During a BB Gun Drive-by in EckingtonScam or Not? “company interviewing all households with an ADT sign outside”