“After 25 years of policing DC streets, deploying officers and strategies, and building a force of highly qualified officers and leaders, in the good times and the tough times, too, I have every confidence in Chief Lanier.” 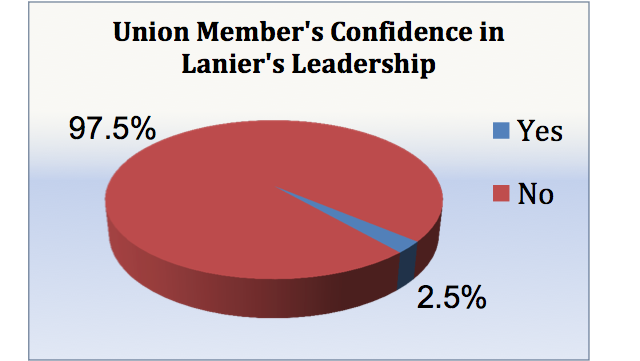 From the DC Police Union:

Members of the DC Police Union were asked the following question:

“Do you have confidence that Chief Cathy Lanier is able to properly manage the resources of the Metropolitan Police Department and keep the citizens safe?”

The members had the choice of answering YES or NO.

1,150 members responded to the poll and 1,122 answered NO, they do not have confidence in Chief Lanier‘s ability to manage MPD and keep the citizens of the District safe.

That‘s an overwhelming 97.5% that answered NO; they DO NOT have confidence in the Chief‘s leadership.”