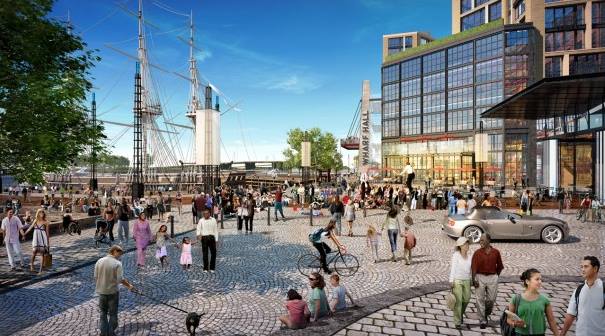 “Washington D.C. chef and restaurateur Mike Isabella announces plans to open new restaurants in Washington, D.C., Maryland and Northern Virginia. A second location of Kapnos Kouzina, the homestyle Greek restaurant set to open in Bethesda, Md. this fall, will go into the former Gypsy Soul space at Mosaic District in Merrifield, Va. in early 2016. But first, the space will be used to test his new French Mediterranean concept, Requin, a partnership with fellow Top Chef All-Star Jennifer Carroll. Details for the Requin pop-up, set to open this fall and run through the end of 2015, will be announced at RequinDC.com. The full-service restaurant will open at The Wharf in D.C.’s Southwest Waterfront redevelopment in mid-2017. Another location of Kapnos Taverna, Isabella’s coastal Greek restaurant in Arlington, Va., is slated to open in College Park, Md., in early 2017.

Occupying The Wharf development’s only freestanding restaurant, Requin, which is French for shark, will be home to a dramatic modern dining room serving a seafood-heavy menu informed by the Mediterranean coast of France. In addition to coastal French cuisine, Requin will feature the largest wine program of any Mike Isabella Concepts restaurant. The fall pop-up in the Mosaic District will be open for dinner only, Tuesday through Saturday, and feature dishes like grilled or a la plancha whole fish, wood-fired shellfish and seafood roasts, dry aged, bone-in ribeye and a classic cheese cart.

When it opens in 2017, the 4,000 square-foot, one-story space will be enclosed with glass walls and highlighted by steel beams and concrete accents that recall the classical stonework of the French Riviera. Requin will be located on The Wharf’s main boardwalk with direct elevator access to the development’s parking garage and feature a patio that will more than double the restaurant’s seating during warm weather months. During patio season, the building’s glass walls will raise, creating a semi-open air environment inside the restaurant.”

Read more →
More Stories
“I was at Barcelona on 14th last night when some guy in a ski mask ran in with a knife. He got laid out by a bartender.”Heads Up – “emergency responders will simulate a smoke/fire incident” in the tunnel outside of the Stadium Armory Metro Sunday