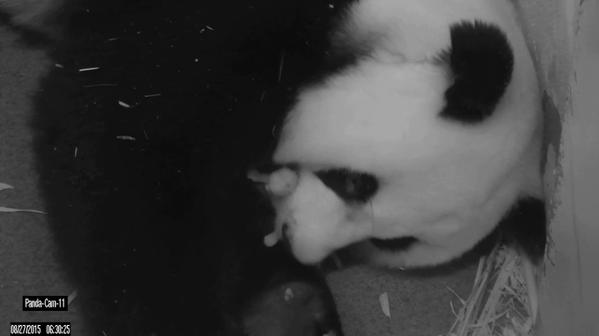 “Our giant panda cub is a boy, and he was sired by Tian Tian! He is doing well with Mei Xiang, and as of early this morning weighs 139.1 grams. He’s gained about 27.9 grams in the past 72 hours. Mei Xiang starting putting him down last night and trying to leave the den. The first few times she put him down he squealed, so she ran back in and picked him up. She finally left the den to urinate and defecate around 1:40 a.m. and returned to her cub at 1:42 a.m. It is normal for Mei Xiang to start spending short periods of time away from her cub. She will gradually increase her trips outside the den as he grows.

When SCBI scientists artificially inseminated Mei Xiang April 26 and April 27, they used frozen and thawed sperm from Hui Hi (a panda living in China) and fresh sperm from Tian Tian.

Our panda cub who died Wednesday afternoon was also a male and sired by Tian Tian.”