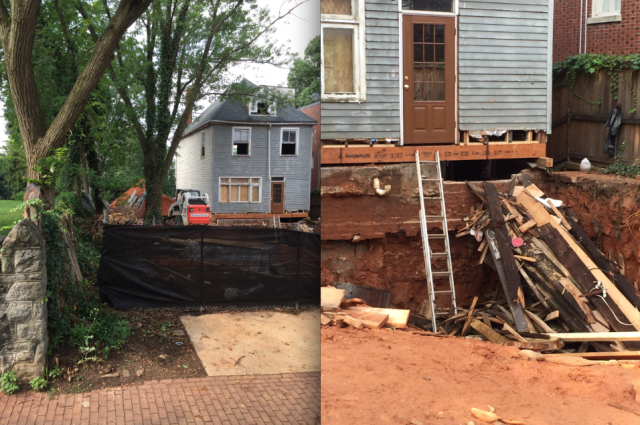 We have a serious issues of concern in Mt. Pleasant surround the redevelopment of a house and lot at 1865 and 1867 Park Road NW. I’m forwarding an email that I just sent to Ward 1 Councilwoman Brianne Nadeau that covers concerns about a dangerous work site, though the issue is much larger than that. There are a lot of very concerned neighbors here.”

I am writing to you to inform about a situation of grave concern in Mt. Pleasant. I know that my neighbors, have also raised this issue with your staff, so I’ll focus on the part that is the most time-sensitive, i.e.the dangerous work site which currently exists.

As of today, 1865/1867 Park Road NW is a hot zone. There is a large pit in the back yard where the basement excavation for the addition to 1867 is being done. IN that pit there are nail-filled boards of all sizes that appear to have been removed from the house. A huge mountain of excavated dirt looms uncovered next to the gutted house. It is exposed to the elements and is likely contaminated with lead from the peeling painted sides of the century-old house. I’m not an engineer, but it looks like the foundation is not properly supported given that the land around it has now been removed and could lead to a dangerous collapse. Additionally, kids can easily access this work site as the fencing that was hastily installed on Monday has a open gap at the end. There are many many kids that live at this end of our beautiful alley, my infants twins being just 2 of them. We all fear for the safety of our children and neighbors. I have included photos so that you can see what I’m describing with your own eyes.

We, the neighbors, would like the reassurance that the developer is complying with DC regulations for the safe and successful rehabilitation of this property. We do not feel that the developers have been forthcoming and our concern is growing.

Speaking for my family, we are also concerned that our neighborhood contacts in the ANC and Historic Mount Pleasant have not sufficiently addressed our concerns throughtout this long and drawout process, leaving us feeling helpless.

Thanks in advance for your help getting this dangerous problem resolved.

“Thank you. I’m not seeing a violation jumping out at me from these photos but Claudia in my office will request that DCRA send an inspector. And of course if you see something that is an immediate threat you should feel empowered to call 911.

I would also recommend that concerned neighbors introduce themselves to the site manager. I will do the same next time I pass by.”