Ed. Note: Critiquing the renovations is not the point of these posts. It’s simply to show what some folks have done. If you like it, obviously, feel free to let them know but again – well let me be clear – don’t be a jerk. Thanks. Sorry to have to preface with that. I really do love these features. These renovations can be extensive – like a whole house gut or simply a 1/2 bath added, floor refinished or even smaller. It can be a whole series of posts or just one. If you’d like to share one of your projects please email princeofpetworth(at)gmail thanks and thanks for understanding! 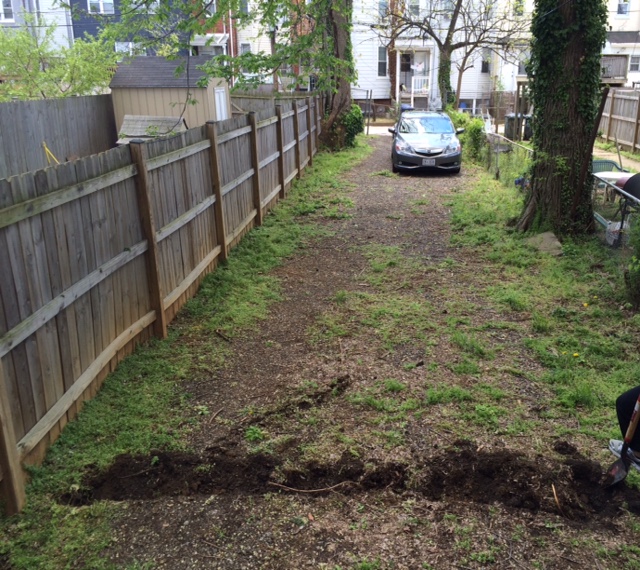 We have a big backyard and decided we wanted a patio, which was convenient since we recently joined the RiverSmart Homes program and they do pervious paver patios. However, after getting about five quotes (most were around $2100) we were still going to pay about $900-$1500 out of pocket depending on which company we used. My fiancée priced it out and said she could do it for around $500. We both realized it was a lot of work, but as far as DIY goes this was one of the easier things to do. It was just going to take a lot of labor and time. We went to Home Depot to start gathering materials one weekend, but turns out Harry Homeowner was also building a patio and pretty much had all the paver sand in his cart along with a million bricks! After picking up some of the bricks and sand we realized it was going to be really difficult to get the materials in our car and then from the car to the backyard. We went home and looked online, but of course Home Depot said we could only purchase it in the store. However, Lowe’s would deliver the materials for $85! 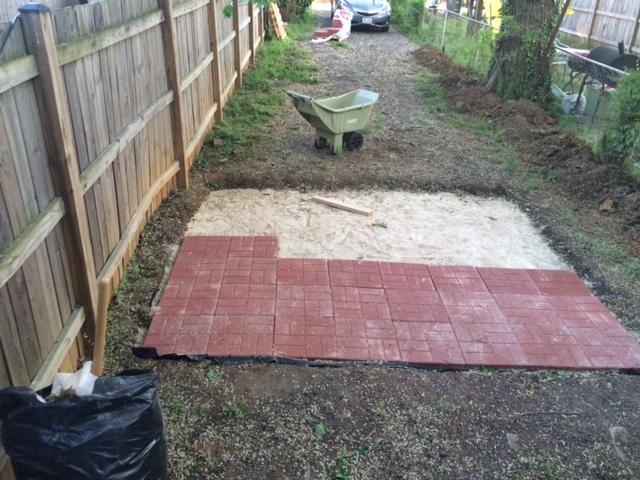 Lowe’s messed up the delivery time and wouldn’t pick up the phone. They actually delivered it about five hours late and ended up waiving the $85 fee! Full disclosure: I went to New York City and my fiancée did all the digging, laid the weed barrier, gravel, and sand. She even did the first row of pavers. I got home that Sunday and began laying pavers and realized this was not easy at all! It was so tedious, and quite a work out as the pavers were toward the back of the yard so we would gather four to five pavers and then bring them up to the patio in a wheelbarrow. Then came carrying it from there to the patio. And when the sand wasn’t perfectly level and smooth the paver was wobbly! I gave up after a few pavers, but then on Monday, Tuesday, and Wednesday I laid pavers after work. The most frustrating part was when I couldn’t get a paver level and kept having to pick it up, smooth and move the sand with the 2×4, and place the paver back only to find out it still wasn’t level. I think I picked up and put back one paver twenty times. 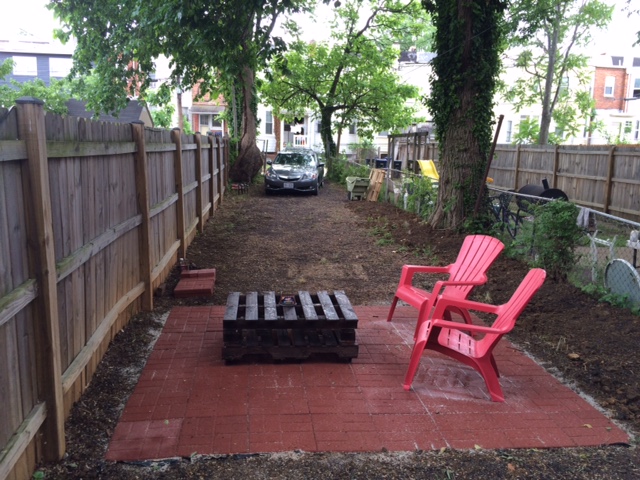 We finished it off the next weekend though and then filled the gaps with paver sand. We also bought two chairs for it and made an outdoor coffee table on wheels out of the leftover pallets from Lowe’s! (Side note: If you’re going to make something out of pallets make sure the ones you use are not stamped with “MB” and that it has a legit stamp. Many pallets in general are treated with gross chemicals! You can google and read more on it.) Lastly, we put some solar lights around the two sides of the patio. We also bought and attempted to hang some edison bulb string lights, but that didn’t go so well! I am going to order some new ones online and hopefully try that again. In the end the patio cost us $485, which includes the gravel, sand, weed barrier, and pavers! I also have a much bigger appreciation for people that do landscape work for a living.

More Stories
Your Afternoon Animal FixChecking in on The Royal coming to 5th and Florida Ave, NW