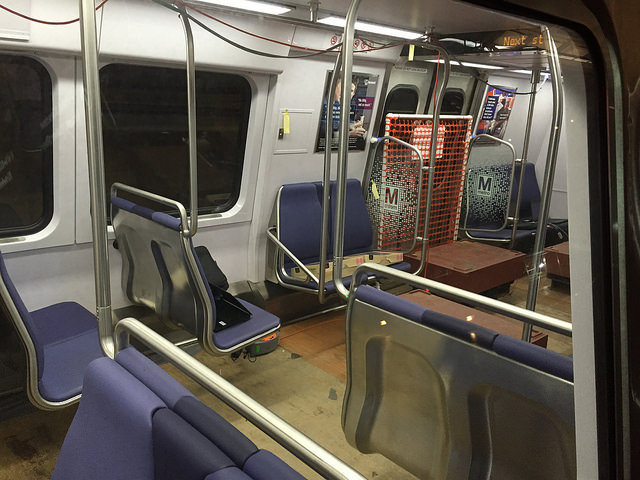 We knew the future of metro was coming soon! Now we know when – April 14th!

“The date is set, Metro customers, and your new ride will soon be here.

Metro has announced that the system’s first 7000-series train will enter passenger service Tuesday, April 14, on the Blue Line.

The introduction of the first new train will be the most significant milestone to date for a project that has spanned nearly five years from approval and funding, through design and engineering, to testing and certification.

The first train in regular passenger service with eight 7000 series cars will depart from Franconia-Springfield shortly after 7 a.m. on April 14. The Blue Line serves five of Metro’s six jurisdictions: Fairfax County, the City of Alexandria, Arlington County, the District of Columbia and Prince George’s County.

“Safety must always be at the forefront of everything we do, and that is exactly what this investment in our railcar fleet is all about,” said Metro Board Chair Mort Downey. “The 7000-series cars represent a significant improvement in safety, reliability and rider comfort, and on behalf of the Metro Board of Directors, I look forward to welcoming our customers aboard in less than three weeks time.”

The 7000-series cars feature new technologies that are generations ahead of Metro’s current railcars, all of which were designed to be “backward compatible” with Metro’s oldest cars, the 1000-series. For example, Metro’s current railcars use analog technology for onboard public address announcements, whereas the P.A. systems on 7000-series cars will be entirely digital and feature clear, automated announcements.

“The 7000-series is an entirely new generation of railcars at Metro – a fleet that is, by design, revolutionary as opposed to evolutionary,” said Metro Interim General Manager and CEO Jack Requa. “The cars were built to maximize safety while providing enhanced rider comfort and reliability. We are excited to welcome riders aboard their new trains.”
Requa noted that the second 7000-series train is already undergoing testing and is expected to quickly follow the first train into passenger service.

Metro has ordered 528 of the new railcars, enough to replace all 1000- and 4000-series cars and expand the size of the Metro fleet by 128 cars. Options to purchase an additional 220 cars at favorable pricing can be exercised if funding is committed by midyear. Metro’s funding jurisdictions have all indicated that they are inclined to support purchasing the additional 220 cars.

Safety is at the forefront in the design of the 7000-series cars, which are:

Built to meet improved crashworthiness standards to absorb maximum energy in the event of a collision,
Equipped with event recorders, meeting federal requirements,
Constructed to meet rigorous fire safety standards, including those from the National Fire Protection Association and the American Public Transportation Association,
Equipped with digital video surveillance systems, providing full coverage of the passenger area, operator cab and front windshield, and
Equipped with “anti-climbers” that help keep cars upright and in-line in the event of a collision.

Unlike earlier railcar series that can be “mixed and matched” within a single train, the 7000-series cars will operate only with other 7000-series cars, and all of the new trains will all be eight-cars in length. The cars will also be in a “quad-unit configuration,” meaning that the cars will operate in four-car sets, allowing the accommodation of 40 more passengers per eight-car train than in older models because of fewer operator compartments.

The modern rail cars are equipped with state-of-the-art safety technology and features designed with extensive customer input. Through the project’s Customer Design Team, actual Metro riders participated in the design of the new railcars at every phase of the process. In addition, seat design options were tested with Metrorail riders in several stations, and Metro’s Accessibility Advisory Committee (AAC) and Riders’ Advisory Council (RAC) provided input.

The new rail cars include a customer-preferred blue and grey interior color scheme and offer a slate of new features and customer amenities, including: