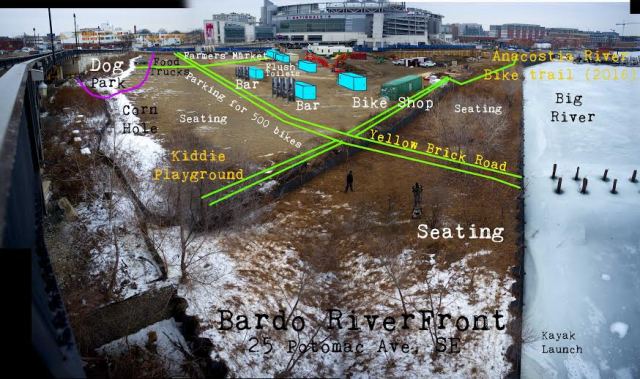 “Just one year after Bardo Brewpub resumed brewing operations following a fifteen year hiatus, the NE DC brewery announced plans to open a two acre, multi use, riverfront location with an on site brewery, next to Nationals stadium.

Bardo is seeking to raise some of the funds needed thru an indiegogo campaign. With a twist. The brewery is offering groupon-style discounts on beer at the new location. “Our Living Social and Groupon promotions have been huge successes,” stated Bardo Brewpub’s Andrew Stewart, “we thought we would try it on our own via this fundraising platform”. “We have enough cash to do a bare bones build out”, added Bardo head man, Bill Stewart, “but the last time we opened before the permanent bathrooms were built and it was not well received.”
The indiegogo campaign can be viewed here. [Ed. Note: The goal is an ambitious $200k]

Initial plans call for riverfront seating, a sculpture garden, outdoor films over the water, DC’s largest dog park, an on site bicycle shop designed to interface with the location on the metropolitan branch trail, and a large outdoor space designated for activation by the local community in the form of farmers markets, swap meets and assorted community events.

Bardo Brewpub’s location in NE DC is, for now, the largest beer garden in the city. A newly renovated interior boasts one hundred year old pine floors, brick walls and early century, tin, press plate ceilings. A wide variety of GABF award winning house brews are available in pints and pitchers as well as growlers. Bardo is 100% dog friendly every day with 15,000 square feet in our beer garden to roam off leash. Located at 1200 Bladensburg rd NE, Bardo has cornhole, big screen movie viewings/sports and is available for private parties/fundraisers, large and small.

Bardo Rodeo operated in the 90’s as the largest brewpub in the country. The 22,000 sq. ft. former car dealership included 900 indoor & 700 outdoor seats as well as a 25-barrel brewhouse. As one of the first bars in the Clarendon neighborhood in Arlington VA, Bardo brewed 4000 kegs a year and enjoyed thousands of visitors each weekend.

The decision to put the brewery in storage for more than a decade proved a fortuitous one. Bardo head man, Bill Stewart, had been living overseas for years when his brother, Andrew, convinced him to come back stateside a start making beer again. “I didn’t know craft brewing had become cool again. We rode the last wave, we decided to jump on this wave.” Bill stated.”