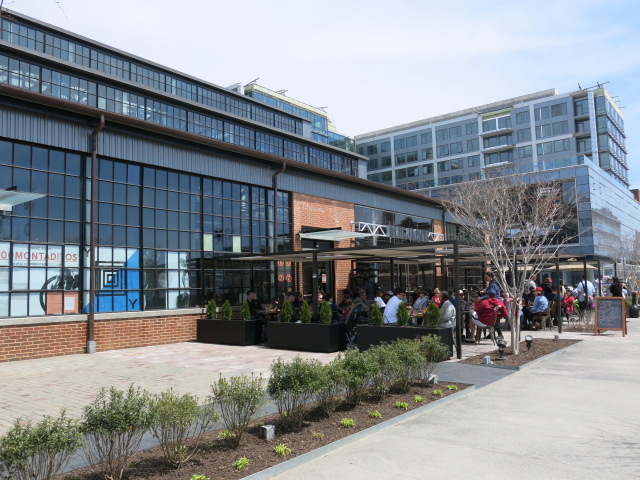 “The growing collection of distinctive local and regional restaurants and retailers that are joining The Yards has just taken a significant step forward with the announcement that the renowned, DC-born and based menswear purveyor, Hugh & Crye, will open in March at The Yards. The announcement was made today by Forest City Washington, the master developer of The Yards, a major, urban mixed-use redevelopment project growing in the Capitol Riverfront neighborhood of DC.

Bringing its high quality custom-fit and ready-to-wear collection of menswear and accessories to The Yards is the latest step in the impressive growth of this distinctive menswear retailer which was founded in DC’s Shaw neighborhood in late 2009 primarily as an online retailer (hughandcrye.com).

The new 2,858 SF Hugh & Crye shop will be located in the Boilermaker Shops, the former Navy Yard industrial building on Tingey Street SE between Third and Fourth Sts. SE in The Yards which also houses several other retailers and restaurants, including Bluejacket and Willie’s. Hugh & Crye is the first clothing retailer to open at The Yards.

“The Yards is a wonderful location for Hugh & Crye both in character and style,” said Founder and CEO Pranav Vora. “The industrial heritage of the neighborhood fits well with our brand and appeals to our target customer,” he added.

Along with Co-Founder and customer experience connoisseur Philip Soriano, Hugh & Crye’s ongoing mission is to vastly improve the comfort, fit and look of menswear while operating with a three-prong approach of products, people and planet, based upon the principles of

responsible consumption and sourcing. The company uses only high quality fabric produced in an environmentally-responsible manner without harmful chemicals or additives, as well as reputable shirt makers who genuinely care for their workers by providing fair wages and safe working environments.

“We have been very impressed by the quality and reputation of Hugh & Crye,” said Deborah Ratner Salzberg, president of Forest City Washington. “To have them join The Yards as our initial clothing retailer really sets the tone for diversifying our retail mix in a distinct way as we continue to move forward and grow this project.”

Adding to the growing urban fabric of the neighborhood, many of the retailers and restaurants that have chosen to open locations at The Yards are locally/regionally based and for a few, including TaKorean and Ice Cream Jubilee, The Yards is their first full brick and mortar store location.

The Yards currently offers 14 places to eat (including two that will open in the spring in the Lumber Shed) and additional specialty and service retailers. Harris Teeter, as well as Vida Fitness, along with its Bang Salon, Aura Spa and Penthouse Pool Club Lounge are the retailer anchors of the neighborhood.

At full build-out, The Yards will offer over 2,800 residential units, 1.8 million SF of office space and up to 400,000 SF of retail, dining and services. Additional information about The Yards can be found online at TheYardsDC.com as well as on Facebook, Twitter, Instagram and Twitter.”