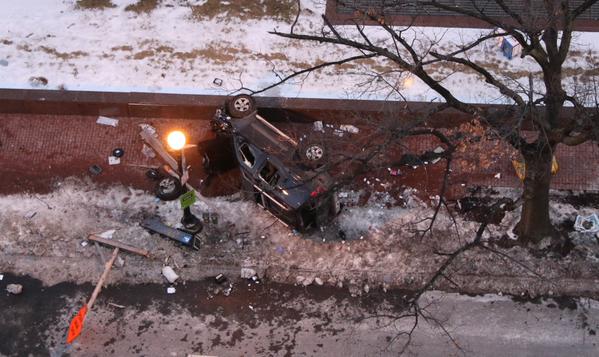 “Detectives from the Metropolitan Police Department’s Major Crash Unit have announced an arrest has been made in a fatal crash involving a pedestrian that took place in the 400 Block of H St Northwest.

On Monday, February 23, 2015, at 4:49 pm, the driver of a black 2013 Nissan Xterra was traveling at a high rate of speed westbound on H Street, N.W. He lost control of the vehicle side swiping several vehicles and other objects before hitting a wall. The impact from colliding with the wall caused the Nissan to flip over and strike a pedestrian, who was standing along the sidewalk. The Nissan then came to rest on its passenger side after making contact with a street light pole. Another pedestrian was then injured by the crash debris.

DC Fire and Emergency Medical Services responded to the scene and transported the pedestrians to area hospitals. The first pedestrian, succumbed to his injuries and was pronounced dead. The decedent has been identified as 27 year-old, Philip Snodgrass of Baldwin, Maryland. The second pedestrian, an adult male, was treated and released.

The driver of the Nissan was transported to an area hospital with minor injuries. The driver, who has been identified as 33 year-old, James B. Chandler, of Silver Spring, Maryland was arrested following his release from the hospital and charged with Involuntary Manslaughter.