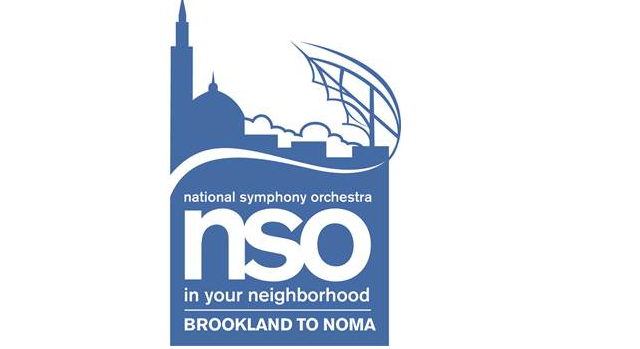 “The National Symphony Orchestra will blanket the neighborhoods of Brookland and NoMa home January 5–January 12, building deeper connections to its community by giving more than 50 free events and performances. From concerts at Echostage and Catholic University of America’s Hartke Theatre to in-school visits, concerts for toddlers, and performances at homeless shelters, NSO members will make music in ensembles large and small. The Basilica of the Shrine of the Immaculate Conception, Echostage, McKinley Technology Education Campus, Dance Place, Union Market’s Dock 5, NPR: these are but a few of the distinctive and colorful locales to be visited, culminating in the concert at Hartke Theatre.

Four events anchor the array of performances, including three by the full orchestra. For these key events free reservations are required, but 15 minutes before performances, unclaimed reservations will be opened up to those waiting in line. NSO In Your Neighborhood Event Reservations.

January 7: Historic Union Market is not only home to more than 30 of the top artisanal food producers in the region, above the marketplace it boasts the distinctive event space Dock 5. There Glenn Donnellan (creator of “The Electric Slugger”—an electric violin made from a Louisville Slugger baseball bat) and NSO colleagues will bring their mix of rock ‘n’ roll, blues/jazz, fiddling, and maybe even classical, to this spacious urban venue. An arrival time of 6 p.m. is suggested; the performance begins at 7 p.m.

January 9: Echostage is D.C.’s newest and largest nightlife concert venue. There the NSO and Principal Pops Conductor Steven Reineke will collaborate with three Washington artists. D.C.’s DJ Stylus, dubbed “The Vibe Conductor” by his fans, launches the action with his self-described “party rocking philosophy.” Bach and Pachelbel then meet Christylez Bacon and Wytold. Christylez Bacon, a Grammy®-nominated musician “whose sound lives at the intersection of soul, hip-hop and jazz” (Washington Post), and Wytold, performer extraordinaire on the electric six-stringed cello, will also bring some of their original compositions to the NSO. Doors open at 7:30 p.m. with DJ Stylus; the NSO and guests begin at 8:30 p.m.

January 12: Music Director Christoph Eschenbach leads the NSO in a concert saluting the Benjamin T. Rome School of Music on its 50th anniversary. The all-Mozart program includes the Overture to The Marriage of Figaro and the Symphony No. 41 (“Jupiter”), and Principal Flute Aaron Goldman will be featured in the Mozart Flute Concerto No. 2, with cadenzas by Lera Auerbach, commissioned by the NSO. This concert is already at capacity, but 15 minutes prior to the performance, any unclaimed locations will be made available to those waiting.

The complete list of activities, as known at the time of this release: