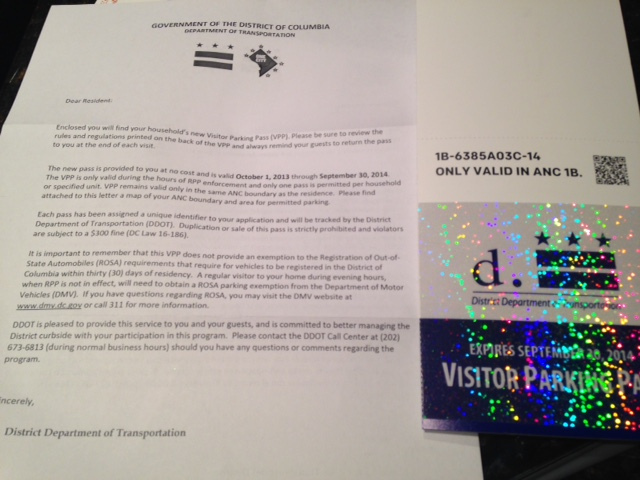 I received in the mail today a new Visitor Parking Pass for 2013-14, which expired in September. I understand that they are actually valid through the end of the year, but why go through the expense and effort of sending out new passes this late in the year?

Curious if any POPvillagers have received new passes as well…

Oh, and in anticipation of potential comments —

“A few weeks ago I registered for a 2015 parking pass from DDOT. So I was surprised today to receive in the mail an expired 2014 parking pass, along with a letter that says my “new” pass is valid from Oct. 1, 2013-Sept. 31, 2014. Is this a glitch? Am I alone, or did this happen to people all over the city? I know this particular DC program has been a garbage fire for a while now, so I’m eager to learn whether we’re witnessing new depths of incompetence.

For the record, DC will continue to recognize the 2014 parking passes through Dec. 31 of this year. But it still makes no sense to send out the letter and pass shown in the attached photograph.”

Last night in trying to clear up some of the confusion @DDOTDC tweeted:

Ed. Note: Reminds me a bit of the upside down flag fiasco.

“Some of you have been in contact with us regarding the expiration date on your new Visitor Parking Permits. I have been in touch with DDOT and they have provided the following information.

More than 22,000 residents have registered for a 2015 Visitor Parking Pass (VPP). An additional 3,900 residents registered and may have received a 2014 Pass in error. Furthermore, the website and the letter mailed with the 2014 VPPs were confusing. We take full responsibility for all of this. Please note that every resident who registered for a Visitor’s Parking Pass between August and December 15th will receive a 2015 VPP by December 31st. If you experience problems registering for Visitor Parking Pass online, please contact DDOT’s call center at (202) 671-2700.”