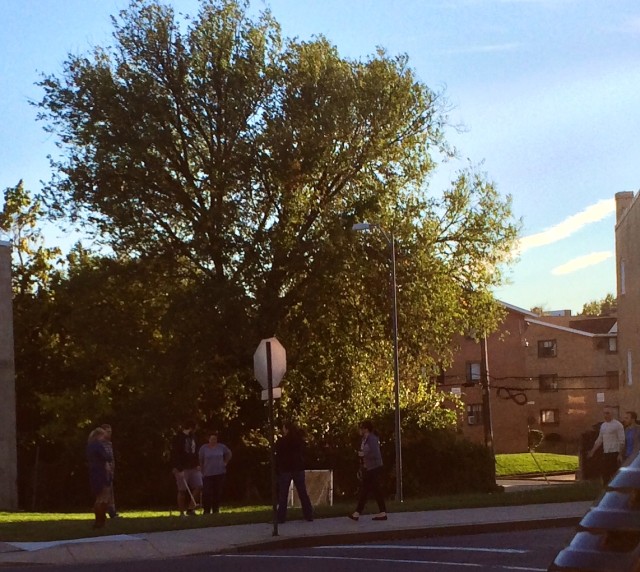 I thought I had dodged a bullet when I saw three individuals on ATVs ride past me on my way home just now. But as I got closer to home, things took another turn. On Warder Street, I encountered the scene captured in this photo. Talk about sketch! As if Park Morton doesn’t have enough problems — now this.

Perhaps your readers know of something that can be done? Surely these people do not own this land, and have not cleared any croquet-related activity with the city. Yet there they were, using it with abandon. It’s so unnerving to be going about one’s business in an urban setting and then be confronted with a group of people wielding wooden clubs. When I looked at them for what must have been a second too long they made some sort of joke among themselves and just laughed.

You would have maybe hoped that this element would be too distracted by the Nationals to be on a street corner, menacing passersby with mallets and the threat of an errant ball. But no. I risked taking a photo but obviously I didn’t want to get very close. But I just had to let innocent people in the area know to beware. The last thing I want is to turn on the news tonight and see a report about Park View’s wicket problem.

Knowing that you care deeply about safety issues in the community, I wanted to let you know. Please keep this note anonymous, as I would be worried about possible retribution (I live on a street nearby).”

Ed. Note: Hilarious. Though I’m not sure if the woman hit by an ATV resulting in a broken pelvic bone, broken tailbone and a left broken leg, and other injuries would agree.

Read more →
More Stories
“In short, carrying a handgun without a license in the District of Columbia remains illegal”Photos from PoPville – Fall