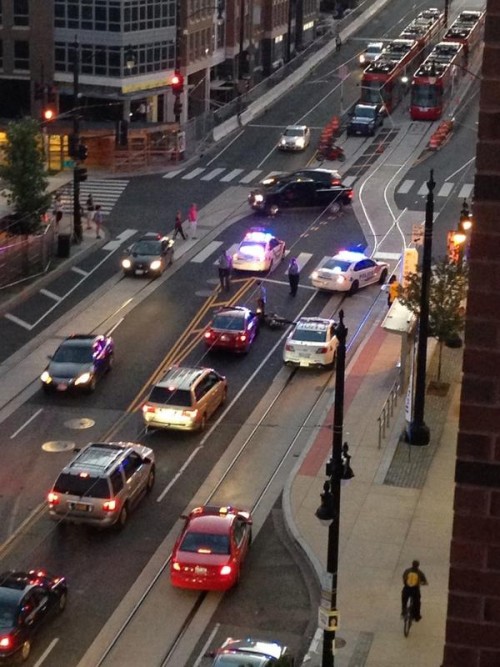 From an incident on H Street, NE earlier in the week

The week started with a serious dirt bike accident in Columbia Heights, followed by scenes of 100+ ATVs and Dirt Bikes spotted all over town and ends with, as predicted by many, a very serious incident injuring a pedestrian.

“[The driver of the motorbike] popped the wheelie and I guess her shirt or something got caught on his handlebars and he lifted her into the air with the bike and somehow the bike threw her off, right in front of my car,” he recalled. “I seen her, like a bullet comes toward my car, so I stepped on the brakes.”

Cheek said he found her partially underneath his car, not moving. Her injuries were extensive – a broken pelvic bone, broken tailbone and a left broken leg, among other injuries.

In the meantime, her cousin said the biker crashed as well – but she said he stood up, looked back and laughed before jumping on the other rider’s bike and escaped.

After reading that story a reader writes:

“After last night’s incident, which could have in all likelihood killed this victim , I would like to know how we as a community can ban together and get some serious changes to the laws and enforcement. We cannot sit back and watch these people terrorize our neighborhoods and streets any longer without consequence. Why does it take a near fatal hit and run to bring about change?”

Another reader shares a conversation they had with MPD after the earlier reports posted here. MPD responded:

“I understand your frustration and don’t agree that we are more concerned about illegal riders than residents…we are acting within our scope of policy and safety for all ….we will continue to use surveillance via the helicopter and try to identify the perpetrators/arrest when we can …. Also seize those vehicles that are on public space when able to do such safely .. This is a challenge for all of law enforcement.

you may call 911 and MPD would respond to this however we will not pursue them/chase them around the streets.”