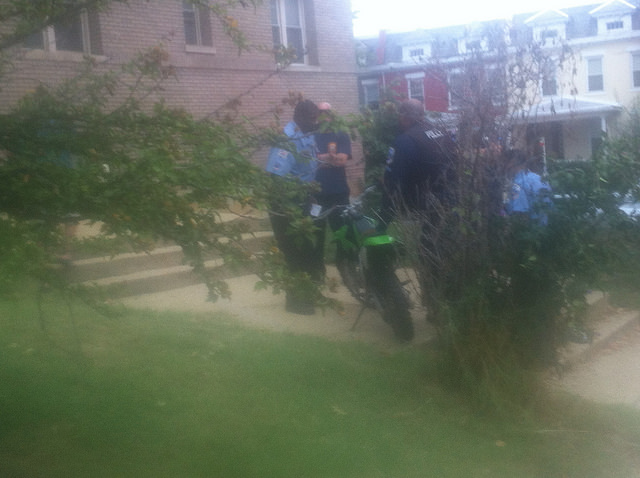 A reader sends just after 7pm:

“There’s been a serious accident with the motorcycle kids at 11th and Euclid.

They apparently were zooming down the streets all evening. The kids attempted to pass a driver who was going east on Euclid and about to turn left into our alley at the northwest corner of 11th/Euclid. I talked with the driver and got her story, as my house abuts the alley entrance and I just returned from work.

The kids tried to pass her from behind on the inside as she made the turn. The motorcycle scraped along the left side of car, ripped off her side mirror and the kids went flying off the bike. No helmets.

Apparently the passenger and driver are father and son with the son being around 12.

After the bike sideswiped the car, the motorcycle drove up the sidewalk and the passengers were ejected at the part where the lawn meets the sidewalk. The father tumbled onto the lawn head first, while the child fell onto his arm on the sidewalk.

The child’s arm is injured. According to the car driver, the father appeared to be fine for the first few minutes. Then suddenly he started spasming/convulsing and went into shock, eventually laying on the grass.

Some of the friends/neighbors of the bikers arrived on the scene and initially began harassing the driver prior to the arrival of the police.

Overall, a sad scene and the cops are in possession of the bike.”