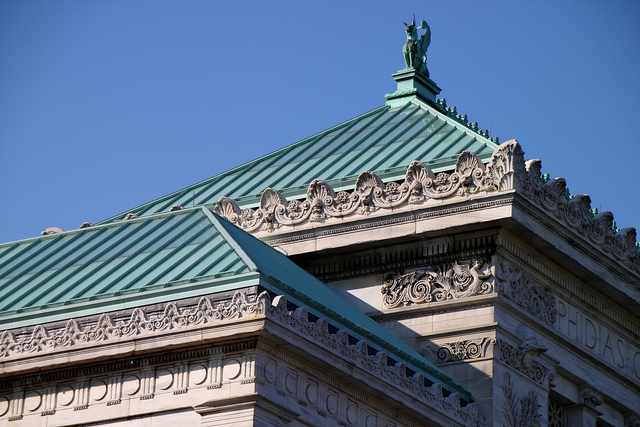 Following a procession from the Corcoran, the service will continue at Oak Hill Cemetery 3001 R Street, NW, Washington, D.C. at 3:30 p.m. at the site of William Wilson Corcoran’s mausoleum. (Please note: there is street parking only and carpooling is encouraged.)

The location and time of a reception where friends in the community are encouraged to share remembrances and farewell comments will be announced in the memorial service program that day. A guest book will be available at all sites.

Small, personal Corcoran-related tributes will be collected throughout the service for cremation after the memorial. Those bringing tributes are requested to provide a self-addressed stamped envelope. The ashes will be mailed at a later date. An In Memory of the Corcoran Gallery of Art Facebook page has been created for posting Corcoran memories.

Attire: Guests are encouraged to wear black or dress in period clothing of the Victorian era as a tribute to William Wilson Corcoran: black arm bands, men in mourning coats, women in dark veils with black umbrellas.

Note to photographers: Photos may be taken in some areas, but please be aware that flash photography is not permitted in the Gallery, in special exhibition galleries, and limited in the collection galleries. These guidelines also pertain to the use of cell phone cameras.

“So the Corcoran is ‘gone.’ What is not gone is the artistic, intellectual and cultural product generated by generations of staff. What remains is the impact of Walter Hopps’ or Jim Harithas’ provocations, Gene Davis or Bill Christenberry’s art and influence, Jane Livingston’s exhibitions and catalogues, the work of Frances Fralin or Linda Simmons and so many of their successors who burnished and expanded that legacy,” said Michael Botwinick, former Director of the Corcoran.” When you start to think this way, you can go on and on—there are so many that are a part of that list. So for everyone out there who has been a part of the Corcoran History, reflect on the important work that you were a part of, be fiercely proud of it, and do not let this sad final chapter diminish your understanding of your accomplishments or that of the friends and colleagues that you admire.”

“The Corcoran represented the history of American art as a whole and of Washington, D.C. in particular. There was nowhere else in Washington where one could experience the city’s history through art, dating back to the late 19th century,” said Linda Crocker Simmons, Corcoran Curator Emerita, and the organizer of the memorial service. “Since the opening of the Gallery and the College, the Corcoran’s collecting has served a dual purpose: to survey American art and Western art as well as the works of D.C. area artists.”

“Nationally and internationally, the Corcoran’s highly acclaimed Biennial exhibition had at one time been looked to as the exemplar of the best of what was happening in American art,” said Elizabeth Punsalan, former Corcoran Director of Corporate Relations and Special Events. “What had been so critical to the Corcoran’s operation and expression was its independence as an institution.”

The late art critic Frank Getlein who hosted a WETA-TV special on the Corcoran passionately stated in the show, “It is all at the Corcoran and if you are an American you have to go there to begin to understand yourself. But whatever you are, the Corcoran’s collection is the best readily available summary of a new country, a new mind, new vision……..”

From August of this year reaching back to mid-2012, a slow insidious illness befell the Corcoran leading to its rapid decline. Members of the public as well as local and national press repeatedly sounded the alarm, but all was lost in the end. Many of those people have expressed their horror, disbelief and sorrow at the demise of this cultural treasure.

“The bottom line in this debacle is that any decision to disassemble and repurpose the Corcoran, handing over its artistic and financial assets, should have been made not by a temp but by a permanent hire—a director with the experience, imagination, and long-term commitment to turn around a stricken institution that needed urgent care, not assisted suicide.”

“…Such a final and irrevocable destruction of one of the oldest and most cherished cultural institutions in our country.”

“It will say a lot about how we value art in our society, what happens to the Corcoran.”

“The collection as a living entity is gone, and so, too, the Corcoran as an independent presence in Washington cultural life.”

“If the collection is dismantled, even with the National Gallery cherry-picking what it wants (and when are curators ever right about what is of lasting importance?), the Corcoran legacy and history will have been destroyed.”

“Demolition by neglect is insidious because it allows property owners to evade their responsibilities and then, all too often, rewards them for doing so.”

“Technically, a shell of the Corcoran would continue to exist, merely to maintain the Orwellian fiction that the Corcoran hasn’t died, it’s just found new “partners.”

“We (GW) may be the big fish when it comes to real estate and research, but when it comes to the arts, the Corcoran is a whale. If we fail to recognize this, we could be not only consuming the college, but destroying its value.”

“And yet, after so many identity crises and near-death experiences and especially the trauma of the last five years, the demise of the Corcoran Gallery of Art and College of Art + Design as we know it arrived as a wrenching shock.”

“But in all the sadness, it is important to remember that what is about to perish is not the Corcoran that generations of brilliant, creative and dedicated staff labored in. What is passing into history is a shell, hollowed out by a generation of feckless governance.”

“This court finds it painful to issue an order that effectively dissolves the Corcoran as an independent entity.”

“The irony of its final destruction is this: Corcoran’s original premise has never been more important.”