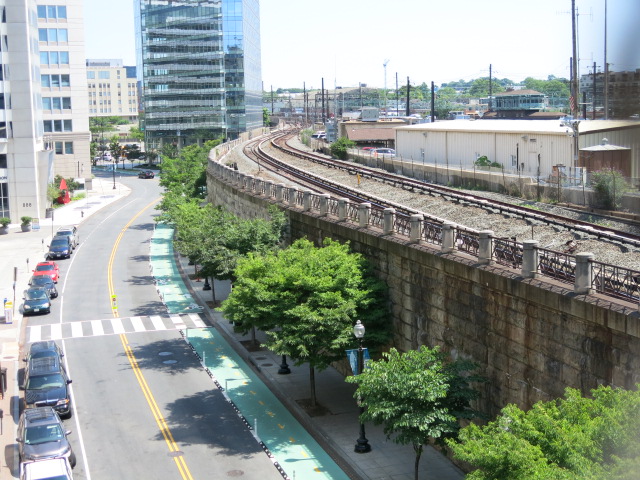 This battle is starting to get bloody.

“NoMa just got even more bike-friendly, with new air pumps and a free public repair station installed in the neighborhood. To serve cycling traffic from the Metropolitan Branch Trail and the beautiful new cycle track on First Street, NE, the NoMa BID has installed a bright orange FIXIT station, an outdoor, tamper-resistant repair station that includes all the tools necessary to perform basic repairs and maintenance, from changing a flat to adjusting brakes and derailleurs. The tools and air pump are securely attached to the stand with stainless steel cables and tamper-proof fasteners. Hanging the bike from the hanger arms allows the pedals and wheels to spin freely while making adjustments. The FIXIT station is located right off the Metropolitan Branch Trail ramp on M Street, NE, under the underpass and across from the M Street entrance to the NoMa/Gallaudet U Metro station.

In addition, the NoMa BID has installed five new, tamper-resistant, bright orange bike air pumps throughout the neighborhood at the following locations:

An additional location is in the works north of Florida Avenue. The BID began installing the air pumps several years ago, and has sought a more weather-hardy and tamper-resistant option for these new pumps.

“NoMa has some of the best cycling facilities in the city, with the Met Branch Trail and the Union Station Bikestation, as well as seven Capital Bikeshare stations,” said Robin-Eve Jasper, President of the NoMa BID. “We are constantly looking for ways to make the neighborhood more accessible, safer and enjoyable for cyclists and pedestrians.”

The District’s first cycle track protected by a concrete barrier opened on First Street, NE, in May to much fanfare. The NoMa BID team continues to work with the ANC, the District Department of Transportation and the Office of Planning to improve cycling amenities in the neighborhood.”