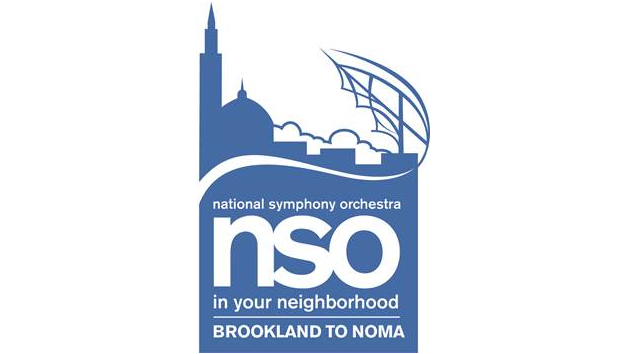 “The 2015 NSO In Your Neighborhood will take the National Symphony Orchestra (NSO) to Brookland and NoMa (North of Massachusetts Avenue) neighborhoods. Between January 6 and 12, free community engagement activities will again find the NSO performing orchestral concerts and working with nearly 20 community partners to create the mosaic of chamber music performances, events in schools, libraries, daycare centers, community centers, and unique events that has become the distinguishing characteristic of this cornerstone of the NSO’s community engagement programming. The events will culminate in a concert at Catholic University of America’s Hartke Theatre led by NSO Music Director Christoph Eschenbach on January 12.

The 2015 NSO in Your Neighborhood is the NSO’s fourth neighborhood-specific, intensive performance project in DC. In 2014, over the course of seven days, more than 50 events took place on Capitol Hill and H St., NE, in schools, churches, community centers, restaurants, and bars. Key performances took place at the Atlas Performing Arts Center and Union Station, with additional events at such neighborhood locations as Rock and Roll Hotel, Hill Center at the Old Naval Hospital, Eastern Market, and with the DC Youth Orchestra at Eastern High School.

The majority of the schedule will be determined by the community itself, with the partner organizations gathering requests from their neighbors. The full schedule will be announced at a later date.

The venue for the NSO concert on January 12 is Hartke Theatre, named for the pioneering priest who not only oversaw the CUA drama department for nearly four decades, but also actively worked to end discrimination in Washington theaters.

Examples of anticipated activities include Teddy Bear Concerts (designed for children ages 3 and up); performances geared to middle school students that connect music with key academic subjects such as history and math; chamber music; master classes; speaking engagements; and more.

In previous years NSO In Your Neighborhood has allowed the NSO to forge non-traditional partnerships, with events bringing dancers, actors, hip-hop artists, and a drumming troupe, in performances with NSO musicians. The Last Stand Quartet—violinists Joel Fuller and Alexandra Osborne, violist Mahoko Eguchi, and cellist Rachel Young—and NSO violinist Glenn Donnellan have been particularly active in these partnerships.

Organizations interested in requesting activities may use the form on our web site here and find more information about past NSO In Your Neighborhood events.”