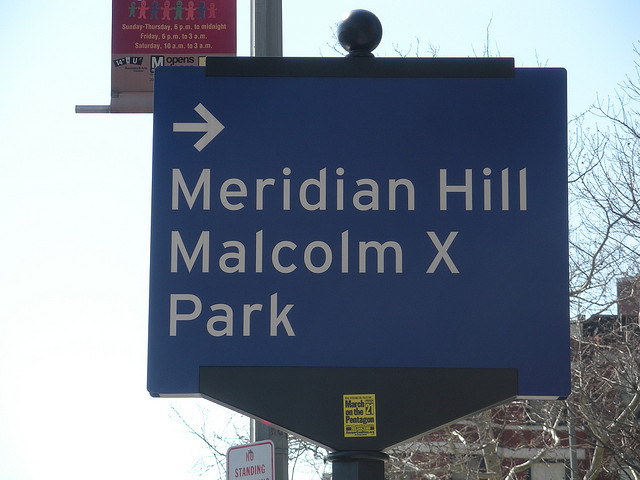 A question we’ve been debating for quite a long time. One commenter has said:

“From the Historic American Bldgs Survey: “The park is also known as Malcolm X Park, however, that name cannot be officially adopted because the name of a park with a presidential memorial [President James Buchanan] cannot be officially changed under federal regulations.”

“The park has had a long and varied history. In 1819, John Porter erected a mansion on the grounds and called it “Meridian Hill” because it was on the exact longitude of the original District of Columbia milestone marker, set down on April 15, 1791 at Jones Point, Virginia by Major Andrew Ellicott assisted by Benjamin Banneker, an African-American astronomer and mathematician. It was to this mansion that John Quincy Adams moved when he left the White House in 1829. At that time, the entire high ground surrounding the park was known as “Meridian Hill.”

Construction was begun in 1914, but it was not until 1936 that Meridian Hill reached the full status of a formal park. In 1933 the grounds were transferred to the National Park Service.”

“A leader of the Black United Front began referring to the park in honor of the civil-rights leader on the one-year anniversary of the assassination of Martin Luther King Jr., says Simone Moffett, cultural-resource specialist for Rock Creek Park, the organization that deals with administrative issues for Meridian Hill. DC residents later voted for the name to be officially changed to Malcolm X. A bill to change the name was introduced to Congress in January 1970, says Moffett, but didn’t pass.”