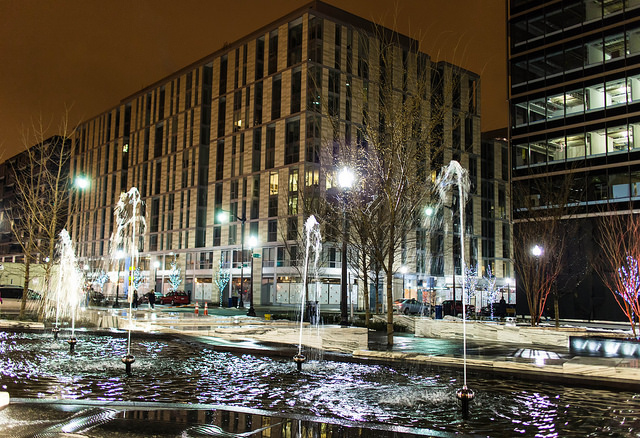 “The group [The Smith] is eyeing a space in the area formerly intended for Apple on Eye Street NW facing the CityCenter’s Northwest Park, adjacent to where Momofuku’s David Chang is also said to be looking at space.”

The Smith is a casual American Brasserie with three upbeat locations in New York City: The Smith East Village, overlooking bustling Third Avenue, The Smith Midtown, in the heart of Manhattan, located on 51st Street and Second Avenue and The Smith Lincoln Center directly across from historic Lincoln Center.

Utilizing local products and purveyors, the breakfast, lunch, brunch and dinner menus feature a selection of familiar bistro dishes. Signature dishes at all locations include Crispy Fried Calamari “Brooklyn Style,” Pot of Mussels with chardonnay-dijon broth and perfectly cooked hand cut fries and four different cuts of steak prepared char broiled, served with a choice of homemade sauces including béarnaise, green peppercorn and chimichurri. Most of the desserts are fun twists on classics, including Sticky Toffee Pudding, S’mores in a Jar and Hot Fudge Sundae with almond bark and flourless chocolate cake.

Our bars offer an elaborate menu of classic and signature cocktails made with fresh fruit and herbs. We serve seven local hand crafted beers on tap and have a selection of 20 wines available by the glass or carafe as well as a hand selected bottle list.

The crowd at The Smith is eclectic, attracting after-work colleagues, late-night revelers, families for Sunday brunch and more. Our guests come for all occasions – a drink after work, a quick bite before a movie, a business dinner, or to celebrate a birthday.

My folks actually live around the corner from one of these and I’ve had the occasion to visit a few times. I’m a big fan and while I was a big supporter of an Apple store opening here, I think The Smith would be a great addition to the District dining scene. It reminds me of Philly’s Le Parc opening in DC as Le Diplomate. The Smith is a big beautiful space that I think will be equally as successful as Le Diplomate if they open here. Keeping my fingers crossed.