Fourteenth Street NW between Irving Street and Park Road, the commercial hub of Columbia Heights, bustles with activity today. Though it took decades for the block to bounce back from the devastation of the 1968 riots, its new vitality is not really new. One hundred years ago, this block had the same central role in the life of upper Northwest, and the Arcade, a massive multi-purpose entertainment and commercial complex located where the DC USA mall now stands, was its heart. 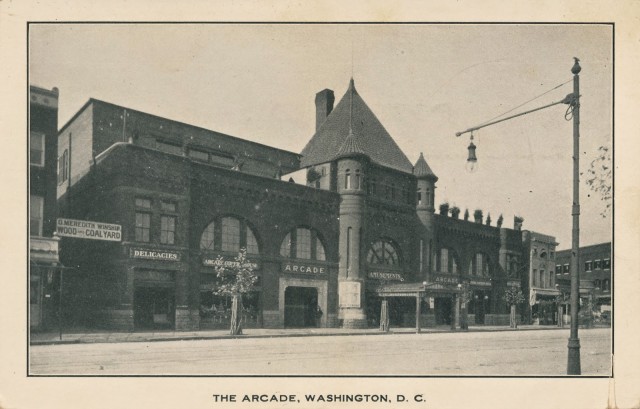 The Arcade began as a Capitol Traction Company streetcar garage, a spacious structure built in 1892, when streetcar lines were first being electrified and extended past the old city limits (at Florida Avenue) into the hilly countryside of upper Northwest. The building’s fanciful Romanesque Revival style, complete with arched windows and turreted corners, was in vogue at the time and was similar to that of the Metropolitan Railway car barn, completed in 1896, which still stands today as a condominium complex at 1400 East Capital Street NE.

The Park Road garage served as the terminus of the 14th Street trolley line for only about a decade. In 1906, 14th Street was extended north to Decatur Street, and streetcar tracks were quickly laid on the newly graded and paved thoroughfare. A large and attractive new car barn was built at the Decatur Street terminus (it also still stands today), rendering the old Park Road structure obsolete. 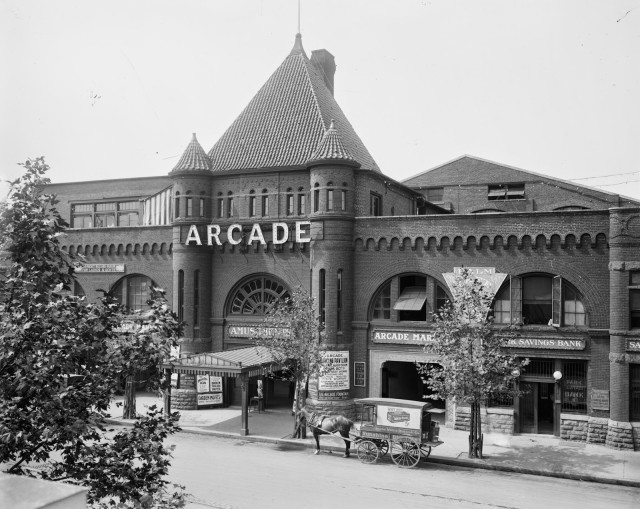 A group of investors including local inventor Emil Berliner (1851-1929) formed the Arcade Amusement Company to take over the old building, expanding and converting it into a lively new amusement hall. The old garage was a rectangular structure fronting on 14th Street. The amusement company extended it north, from the rear, to Park Road, where another entrance was added. The result was an L-Shaped building that wrapped around the backs of three small storefronts perched on the corner of 14th and Park Road.

The new complex featured a wide assortment of entertainment venues. The ground floor was largely given over to commercial retail space as well as a parking garage for 80 cars. On the second floor was a 2,600-seat auditorium, a 300-seat movie theater, and a large ballroom for nightly dancing as well as a “dainty Dutch restaurant,” a poolroom, and a bowling alley. The rooftop featured more dancing, in an enclosed pavilion. An article in The Washington Post in January 1910 claimed that “The main amusement hall alone is practically as large as Madison Square Garden, New York,” and promised that when it finally opened, “There will be thousands of laughs, laughs at every turn. The Cave of the Winds, Helter Skelter, the Vanishing Lady, the Japanese Maze, the House of Trouble, the Lion and the Mouse, the Haunted Swing, the Soup Bowl, the Human Roulette Wheel, and Down and Out, will be among the many amusements.” 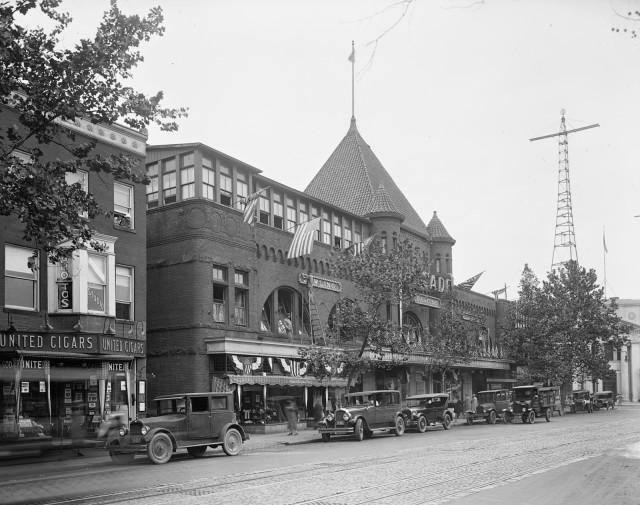 The Arcade circa 1925 (Source: Library of Congress).

The Arcade opened in phases in February and March 1910. First the movie theater, then the rooftop dancing pavilion, followed by the pool room and the 14 bowling alleys. In March the second-floor ballroom had its grand opening, and “the big Arcade building was crowded from end to end with one of the happiest throngs imaginable,” according to the Post. In April, the Washington Kennel Club held a dog show in the auditorium, a grand four-day event featuring 400 of the best-bred dogs from around the country. It would be the first of many such events.

The last part of the complex to open was the big Arcade Market on the ground floor, and it wasn’t without controversy. In May, the DC board of commissioners held a hearing on the proposed market attended by vocal opponents who complained that it would be a nuisance and cause traffic jams on 14th Street. “Never in the history of the new District building has there been a hearing at which spectators showed so much bitterness, and at which feeling ran so high. Every speaker who argued in favor of the market was hissed, jeered, and in other ways interrupted…,” the Post reported. One suspects that these vociferous opponents were perhaps connected in some way to local businesses that were afraid of the new competition.

The market finally opened in December, and it seems most people were very happy with it. It stayed open from 5 in the morning to 10:30 at night and featured about 100 individual vending stands finished in tile and glass for a clean and sanitary look. In the rear were modern refrigerating rooms, a large cork-lined room for storing furs in the summer, and an enclosed plaza where farmers’ wagons could make their deliveries. An estimated 10,000 customers visited on opening day—far more than expected—leaving merchants scrambling to accommodate them all. Some sold out of their stock as early as noon. 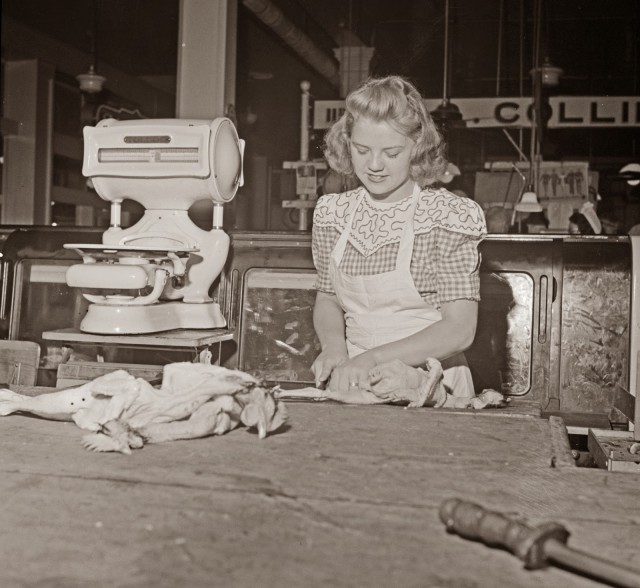 The market filled a crucial need for the many families settling into the burgeoning suburbs of Mount Pleasant and Columbia Heights, but it was based on an old-fashioned business model, the classic centralized urban marketplace of the 19th century. George Washington had designated the spot for the city’s first such commercial hub, the old Center Market on Pennsylvania Avenue. When the city was young, everyone could easily get to Center Market on a daily basis to buy fresh meats, produce, and other groceries. Other markets had been added through the late 19th century to serve the growing town’s more far-flung neighborhoods, with the Arcade being probably the last in a long line. By the 1920s, large central marketplaces were considered unnecessary due to the proliferation of chain grocery stores (and eventually supermarkets). The Arcade Market thus was a throwback almost as soon as it opened. 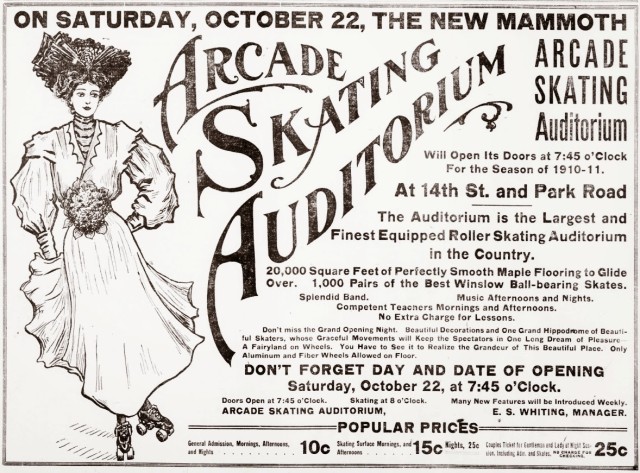 The auditorium on the second floor saw many uses, including a variety of sporting events. In October 1910, before the market downstairs had opened, the auditorium offered roller skating in the evenings. According to an advertisement, it featured “20,000 square feet of perfectly smooth maple flooring to glide over,” and “1,000 pairs of the best Winslow ball-bearing skates” were available to rent. Though one imagines the skates must have produced a steady racket, nevertheless a “splendid band” provided accompaniment. Within two years, public skating was augmented by professional “roller polo” games, played by two five-member teams, which The Washington Times said were a big hit. The sport, now known as roller hockey and still popular in Latin America, can be rather treacherous. A December 1912 match between Washington and Baltimore had to be suspended after two Baltimore players were injured. 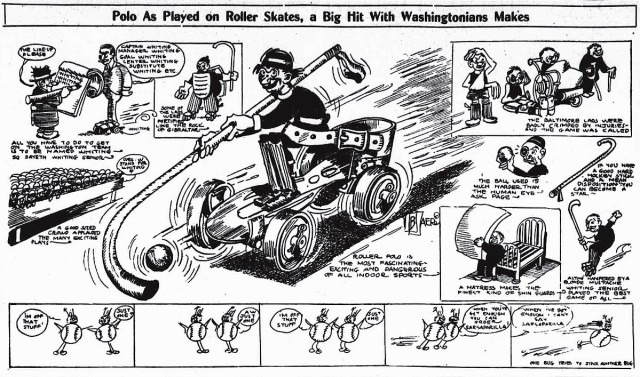 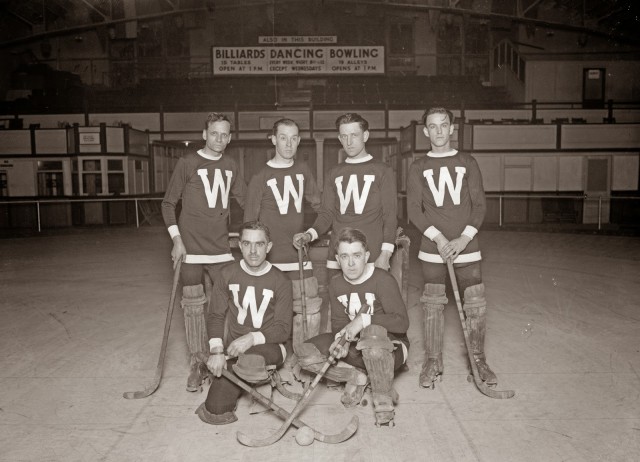 The Arcade’s Roller Hockey team in 1926 (Source: Library of Congress).

In 1926, a group of investors headed by local sports promoter John S. Blick (1886-1955) purchased the aging Arcade and the following year undertook a major expansion of the complex. Both the downstairs market and the upstairs sports and amusement complex were due for expansion, and Blick’s vision was for the upstairs auditorium to be the region’s premier indoor sporting venue. By expanding the rear of the complex, Blick was able to construct a much larger indoor arena, with almost 20,000 square feet of open space and seating for 10,000 spectators. The new layout also included a rooftop garage, said to be the first rooftop customer parking facility in the city. Local theater magnate Harry M. Crandall (1879-1937), who owned the elegant three-year-old Tivoli Theater across the street, was one of the investors contributing to the $1.4 million renovation.

The building’s name was changed to the Arcadia, and it was advertised as “Washington’s Madison Square Garden.” Boxing, wrestling, tennis, and basketball were all played in the newly expanded auditorium, and national tournaments were held in the billiards and bowling halls, which were also much bigger with 55 pool tables and 38 new bowling alleys. Among the many events held in the new auditorium were a building exposition, a fashion review, numerous wrestling matches (Wladek Zbyszko vs. Charles Leppanen was one), the city’s first indoor professional tennis tournament (“Big Bill” Tilden vs. Manuel Alonzo of Spain), and several inspirational rallies, including Dr. B. G. Wilkinson holding forth on the topic of “The Deadly Cigarette” and how it was “seriously affecting health, efficiency, education, and character.”

A place liked the spiffy new Arcadia needed to draw people in, so Blick came up with a powerful attention-getter. He mounted a statue of the Greek god Atlas atop the pinnacle of the roof overlooking 14th Street. Above Atlas’s shoulders a large discotheque-style mirrored globe slowly rotated. Illuminated by four Kleig spotlights, the globe sparkled like a jewel, “producing a very spectacular effect,” according to the Post. 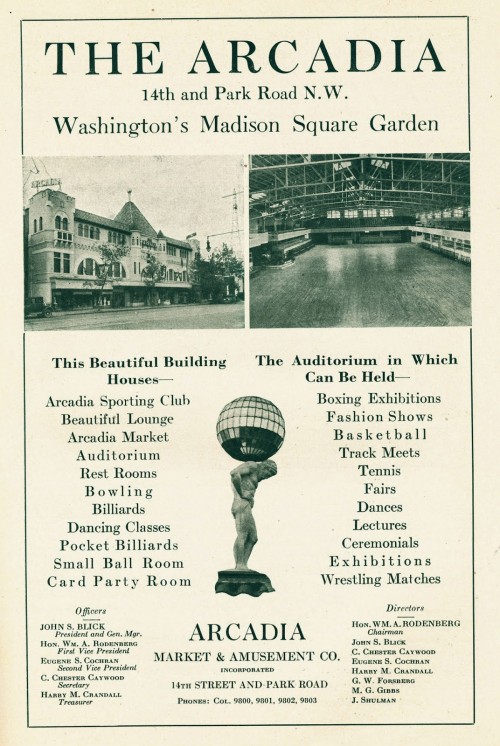 Advertisement from The Book of Washington (1927).

Surprisingly, after only a year or so, Blick decided to reconfigure the expanded auditorium, moving the adjacent bowling alleys into this larger space and adding more alleys. With 52 alleys, the Arcadia was the second largest bowling center in the city, after the previously profiled Convention Hall on K Street. Bowling was to become a dominant sport in the city through World War II, with many businesses, government agencies, and other organizations forming teams that competed in places like the Arcadia or the Chevy Chase Sports Center and Ice Palace, which opened in 1938 on Connecticut Avenue and which was torn down only very recently.

The Arcadia continued to be popular for two more decades, but ownership changed hands several times. The 1927 expansion had left debts that became burdensome in the Depression years, leading to bankruptcy and management reorganization in 1935. Finally Kass Realty (owners of the Chevy Chase Ice Palace) bought the place in 1947 and promptly tore it down the following year. The lively commercial strip along 14th Street prompted Kass to build a “modern” two-story retail structure that could house a department store or other large retailer. Eventually Peoples Drug, which had been on the corner of 14th and Park Road since the 1920s, took larger space in the complex, and a Safeway supermarket moved in where the Arcade Market had once stood. 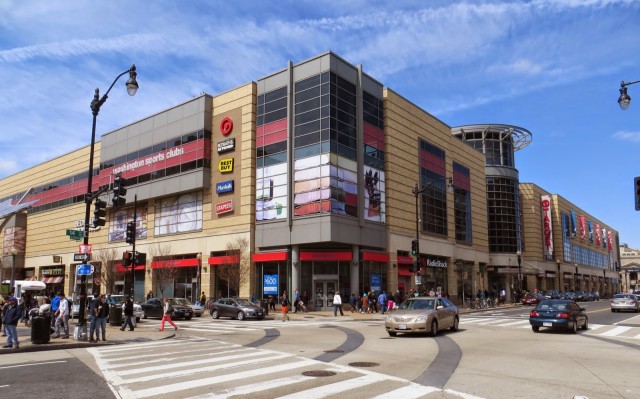 The DC USA Building, seen from 14th and Irving Streets NW (photo by the author).

In April 1968, the rioting that took place after the assassination of Rev. Martin Luther King, Jr., hit the former Arcade block hard. The stores that had been built 20 years earlier were burned to the ground, and the commercial prospects of 14th Street were ruined for decades to come. However, the neighborhood was destined to eventually regain its former self. Forty years after the riots, the DC USA retail complex opened its doors in 2008 on the former site of the Arcade complex. Today DC USA touts itself as the largest retail development in the District of Columbia.