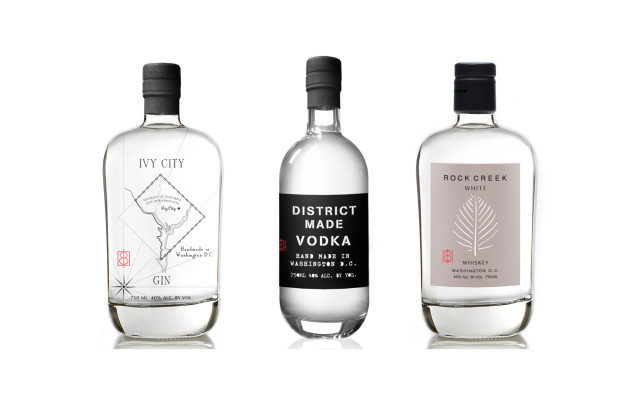 “One Eight Distilling, only the second distillery to open in Washington D.C. since prohibition, has released bottle and label designs for the first round of spirits to be sold by the distillery upon its opening in Summer 2014.

One Eight’s Ivy City Gin, named after the neighborhood where the distillery is located, will also be distilled from locally-sourced rye grain and infused with botanicals in a dedicated gin still. The Ivy City Gin design evokes early city maps demarcating city lines with boundary stones. This intricate label is screen printed directly onto the bottle.

District Made Vodka will pay tribute to the ancient roots of vodka by also being distilled from rye but at the same time employing the latest filtering technologies for a smooth and clean flavor. The District Made Vodka design combines an urban industrial design with a hand-made aesthetic that is central to One Eight’s distilling style.

About One Eight Distilling

One Eight Distilling is named for Article One Section Eight of the Constitution, which among other things provided for the establishment of a district to serve as the nation’s capital. Founded by Alexander “Sandy” Wood and Alex Laufer, One Eight is currently renovating a warehouse in Ivy City with opening scheduled for Summer 2014. One Eight Distilling will sell spirits from its tasting room as well as distribute directly to District liquor stores and bars. One Eight Distilling is located at 1135 Okie Street, NE, Washington, DC 20002.”