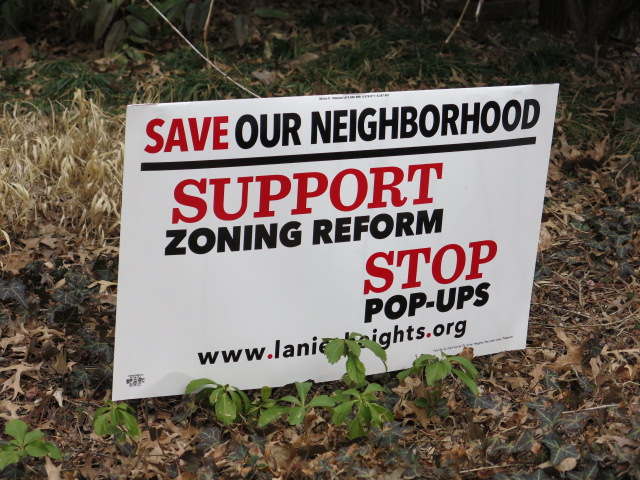 “Last November 6, I took the issue of PopUps in residential neighborhoods to the DC Zoning Commission, which is now conducting an extensive review of Zoning regulations. This issue has been ongoing for some time. Ann Hargrove led the effort some years ago on what became known as the Belmont Tower. Since then there have been many new examples.

Rest assured, attn I am not talking about a simple addition to a row house. But what we have in various areas is a major and dramatic increase in size and density.

I communicated the exasperation that many residents about row houses that have their height or density expanded with little or no formal opportunity for public review and reaction.

Throughout Ward 1, and presumably the city, these PopUps are occurring with increasing frequency. In Adams Morgan, Mount Pleasant, east of Georgia in Parkview, Columbia Heights, LeDroit Park and Shaw/U Street, “towers” are being erected which were previously normal size row houses. This is also occurring in Historic District(—a separate issue that I have taken before the Historic Preservation Review Board.)

The line of sight, the historic streetscapes that are hallmarks of Ward One neighborhoods are very negatively impacted as a direct result. Where once there was light and air, there are now structures that shadow the block. In the current red hot real estate market– found in all parts of our Ward–we need relief from this problem as soon as possible. If that does not occur, the drive for profits will insure that one Popup will be followed by others inalterably changing the character of our neighborhoods!

I asked the Zoning Commission for guidance on what they could do, and what the Council could do, to restrain this development.

I have now received the response from OP Dir Bardin, which I find encouraging as a step of progress. Of course, we await more definitive action. The letter is attached and also reprinted as text below.”

The Office of Zoning (OZ) is writing to update you on the status of “Pop Ups” as they relate to the Zoning Regulation Review (ZRR).

As you know, the Zoning Commission has demonstrated its commitment to determining whether there is an appropriate way to address this issue in the new zoning regulations. Following public testimony on November 6, 2013, the Commission asked questions of the Office of Planning (OP) pertaining to Pop‐Ups, including questions about the idea of design review. As a result of this conversation, OP committed to submit regulatory options for the Commission to consider as part of the revisions to the zoning regulations.

OP has advised the OZ that they are reviewing ways to address inappropriate upper additions through development standards such as upper floor setbacks and changes to permitted heights, and by creating applicable guidelines for these additions that respect neighborhood character. As a companion to the regulations, guidelines would be developed and posted on their website as a resource along with best practices for achieving compatibility.

In addition, they advised that through the current proposed revisions to the zoning regulations, there is a proposal to reduce the maximum permitted height of penthouses in rowhouse zones from 18 feet 6 inches to a maximum height of 10 feet; and that there is a proposal for two new residential zones that would limit the amount of dwelling units to 3 and 4 units, which would help relieve the economic lure to overdevelop larger row homes. Lastly, they committed to continue to research other possible proposals. OZ will make sure it forwards any information it receives concerning “Pop‐Ups” to your office. If you have anyadditional questions, please do not hesitate to contact me.