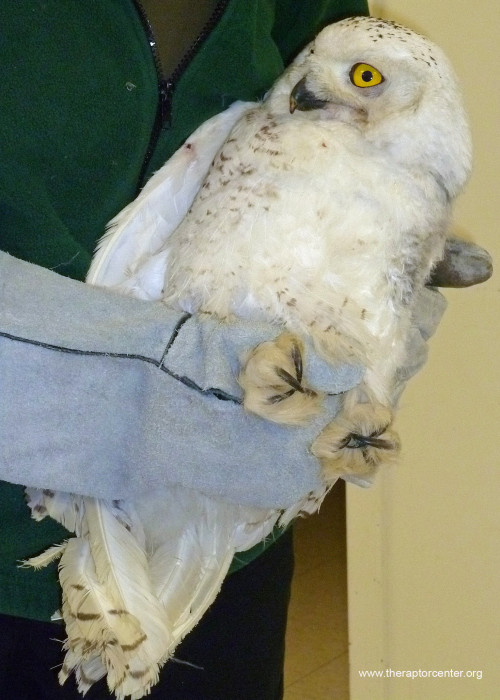 “The snowy owl reportedly hit by a bus in Washington, D.C., in late January 2014 recently arrived to The Raptor Center at the University of Minnesota for care.

“A rehabilitation center on the East coast who had been caring for the owl reached out to us because of our international reputation for replacing damaged feathers,” said Julia Ponder, D.V.M., executive director of The Raptor Center. The Raptor Center rehabilitates more than 900 sick and injured raptors each year, while training veterinary students and veterinarians from around the world to become future leaders in raptor medicine and conservation.

The owl was in-clinic yesterday afternoon having damaged wing feathers replaced through a process known as imping. Since feather shafts are hollow, replacement feathers can be fitted, inserted and glued in by trained professionals, using a piece of bamboo as a connector between the bird and new feathers. Replacing the owl’s damaged feathers will allow the owl to once again fly with the maneuverability it needs for survival in the wild.

The Raptor Center clinic manager Lori Arent is a specialist in imping and performed the procedure. “We’re uncertain as to what caused the singed-like appearance to the owl’s feathers, but it does resemble patients we have treated who burned their flight feathers after flying over an intense heat source, such as a methane burner,” said Arent.

The prognosis for the snowy owl’s release is good. It will receive a test flight early next week and then an exercise program will be established to strengthen its muscles sufficiently for release.”