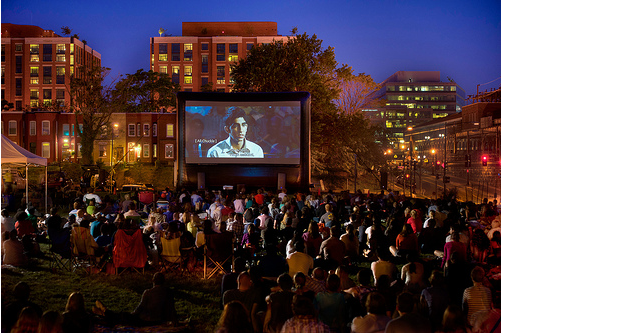 “The theme for 2014 #NoMaSummerScreen is…UNLIKELY FRIENDSHIPS. Vote for which films you want to watch w/your buds”

“Unlikely Friendships” will be the theme of this year’s NoMa Summer Screen. Please select your top 10 favorite movies from the list below.

THE DARK KNIGHT: (PG-13) When Batman, Gordon and Harvey Dent launch an assault on the mob, they let the clown out of the box, the Joker, bent on turning Gotham on itself and bringing any heroes down to his level.(2008)
TURNER AND HOOCH: (PG) A detective must adopt the dog of a dead man to help him find the murderer.(1989)
THE KARATE KID: (PG) A handyman/martial arts master agrees to teach a bullied boy karate and shows him that there is more to the martial art than fighting. (1984)
WHEN HARRY MET SALLY: (R) Harry and Sally have known each other for years, and are very good friends, but they fear sex would ruin the friendship.(1989)
PITCH PERFECT: (PG-13) Beca, a freshman at Barden University, is cajoled into joining The Bellas, her school’s all-girls singing group.(2013)
MIDNIGHT IN PARIS: (PG-13) While on a trip to Paris with his fiancée’s family, a nostalgic screenwriter finds himself mysteriously going back to the 1920s every day at midnight.(2011)
THE MUPPETS: (PG) With the help of three fans (including Jason Segal), The Muppets must reunite to save their old theater from a greedy oil tycoon. (2011)
HOT FUZZ: (R) Exceptional London cop Nicholas Angel is involuntarily transferred to a quaint English village and paired with a witless new partner. While on the beat, Nicholas suspects a sinister conspiracy is afoot with the residents.(2007)
PHANTOM OF THE OPERA: (PG-13) A disfigured musical genius, hidden away in the Paris Opera House, terrorizes the opera company for the unwitting benefit of a young protégée whom he trains and loves. (2004)
THE PERKS OF BEING A WALLFLOWER: (PG-13) An introvert freshman is taken under the wings of two seniors who welcome him to the real world. (2012)
THE SANDLOT: (PG) Scotty Smalls moves to a new neighborhood with his mom and stepdad, and wants to learn to play baseball.(1993)
SHERLOCK HOLMES: (PG-13) Detective Sherlock Holmes (Robert Downey Jr) and his stalwart partner Watson engage in a battle of wits and brawn with a nemesis whose plot is a threat to all of England.(2009)
BOURNE IDENTITY: (PG-13) A man (Matt Damon) is picked up by a fishing boat, bullet-riddled and without memory, then races to elude assassins and recover from amnesia.(2002)
ZOMBIELAND: (R) A shy student trying to reach his family in Ohio, and a gun-toting tough guy trying to find the Last Twinkie and a pair of sisters trying to get to an amusement park join forces to travel across a zombie-filled America.(2009)
DIE HARD: (R) John McClane, officer of the NYPD, tries to save wife Holly Gennaro and several others, taken hostage by German terrorist Hans Gruber during a Christmas party at the Nakatomi Plaza in Los Angeles.(1988)
SHE’S THE MAN: (PG-13) When her brother decides to ditch for a couple weeks in London, Viola heads over to his elite boarding school, disguises herself as him, and proceeds to fall for one of her soccer teammates.(2006)
UP: (PG) By tying thousands of balloons to his home, 78-year-old Carl sets out to fulfill his lifelong dream to see the wilds of South America.(2009)
TOP GUN: (PG) As students at the Navy’s elite fighter weapons school compete to be best in the class, one daring young flyer learns a few things from a civilian instructor that are not taught in the classroom.(1986)
SILVER LININGS PLAYBOOK: (R) After a stint in a mental institution, former teacher Pat Solitano moves back in with his parents and tries to reconcile with his ex-wife. (2012)
BACK TO THE FUTURE: (PG) A teenager is accidentally sent 30 years into the past in a time-traveling DeLorean invented by his friend, Dr. Emmett Brown, and must make sure his high-school-age parents unite in order to save his own existence. (1985)
CLUELESS: (PG-13) A popular girl who spends her days playing matchmaker, helping friends with fashion choices, advising the new girl at school on a makeover, and looking for a boyfriend. (1995)
AVENGERS: (PG-13) Nick Fury of S.H.I.E.L.D. assembles a team of superheroes to save the planet from Loki and his army. (2012)”