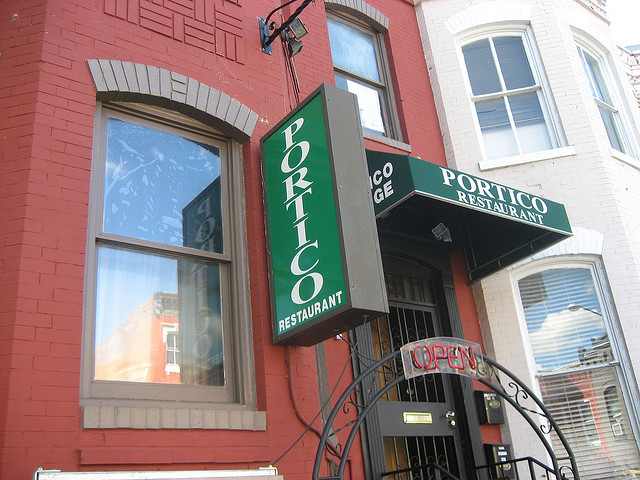 Previously we’ve learned that Cleveland Park’s Dino would be opening up in Shaw “in the vicinity of 9th and U Sts NW”. It’s been killing me trying to figure out exactly which space. On Monday Dino’s Grotto owner sends word:

We now have the keys to the new space and the redecorating starts tomorrow. It will be a quick turnaround. This is a very exciting process as the ideas we have had for a while now are put into place. It is also odd as we are doing almost nothing to the place except clean, do minor repairs, redecorate with paint, removing a lot of mirrors and disco lights, and finally moving in our furniture and equipment.

Our last night of full service with a full menu is February 23. But we will still have food in house. So we thought, why not throw a farewell party. We will just cook food ’til it’s all gone! It’s going to be more of a cocktail party with lots of food served buffet style. Some of the tables will already be gone. We will have a cash bar for beer, booze and vino. One last night to have fun. Tickets only on EventBrite. Admission at the door only if space is available. You will only be guaranteed admission if you pre-buy your ticket on Eventbrite {just hit the link below!} There will be no reservations, no assigned seating, no menus, no special requests. There will be a lot of pasta, sliced meats, prosciutto and cheeses, veggies, etc. We will just bring out food and serve you one last time! It starts at 5:30 and we will start giving you dirty looks at 9:30.

Update from a press release:

A strong believer in “sustainable foods”, Chef Dean Gold’s Italian pastas and dishes are handmade daily of fresh ingredients from local and organic farms, and sustainable fishers & butchers. Dino’s Grotto will also feature local craft brews as well as artisan Italian beers and ciders on tap, and creative cocktails at the hands of master mixologists.