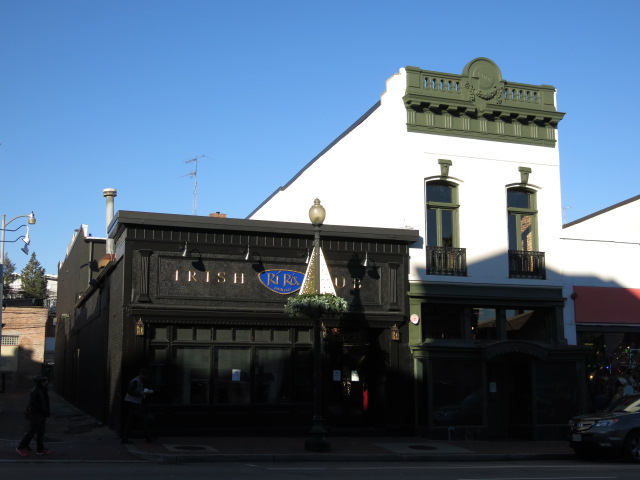 Back in April we learned Ri Ra Irish Pub would be opening in the former Mie N Yu space in Georgetown. They’re now open. From a press release:

“Rí Rá Irish Pub (3123-3125 M Street, NW; 202-751-2111), destined to become Georgetown’s favorite gathering place, boasts cuisine that defies ‘Irish pub’ standards in the United States, a comprehensive beverage list and authentic Irish décor. The dining room and main bar are now open daily, beginning at 4pm on weekdays and 10am for brunch and dinner on weekends, with breakfast and lunch service scheduled to debut later in January. Rí Rá is also finalizing its Whiskey Room, a comfortable specialty bar upstairs, scheduled to open in mid-January as well, which will offer the most extensive Irish whiskey selection in the Washington area alongside a menu of modern Irish small plates.

“Pub fare in general can be seen as drab and heavy; we work to create items that trend more toward comfort and work the lighter elements in where we can and where they make sense,” says Chef Struck of his cuisine.

What truly sets Rí Rá Georgetown apart is the not-so-traditional. The menu will change with the seasons, something new for the brand. Mouthwatering starters include organic Irish smoked salmon served with boxty blini, capers, pickled onion and lemon aïoli and stout mussels prepared with smoked bacon, Guinness, cream, fresh herbs and a crostini.

A selection of Chef Struck’s dishes may be enjoyed all day including Irish classics like shepherd’s pie—minced lamb, carrots, peas, leeks, savory gravy, and a mashed potato crust, and fish & chips—made only with the highest quality North Atlantic cod, served with freshly cut chips and house made tartar sauce—one of the many dishes served with Batchelor’s mushy peas, a homey Irish accompaniment. Guests looking for lighter options can find burgers and carvery sandwiches such as the Dubliner—a ground lamb & rosemary patty, with grilled red onion, goat cheese, topped with curry aïoli, and the publican Reuben—made with local Sweet Farm Sauerkraut, and traditional corned beef & cabbage.

Guests can indulge with a menu dedicated to “sweet pots” after a meal. Delicious desserts include banoffe pie—sliced banana, house toffee, whipped cream and a biscuit crumb, and the trinity—Bailey’s chocolate mousse, Jameson whipped cream, topped off with decadent Guinness chocolate sauce. Stick around for a nightcap and choose from the extensive selection of Irish whiskeys and after-dinner drinks.

Brunch specialties will be available Saturday and Sunday starting at 10am. The menu boasts delectable sweet and savory options. The savory Quay’s waffle is topped with Irish smoked salmon, house made potato waffles, fried capers and lemon aïoli. The sweet Bailey’s Brulée French toast is made with Irish cream spiked batter and finished with a fired sugar crust and maple syrup.

Current hours are as follows: Monday – Friday 4pm ‘til late; Saturday – Sunday: 10am ‘til late.”

You can see their full menus here. 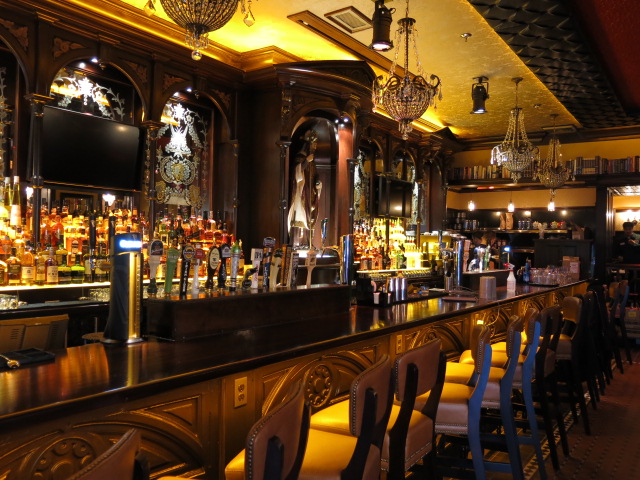 More photos and details about the space after the jump. 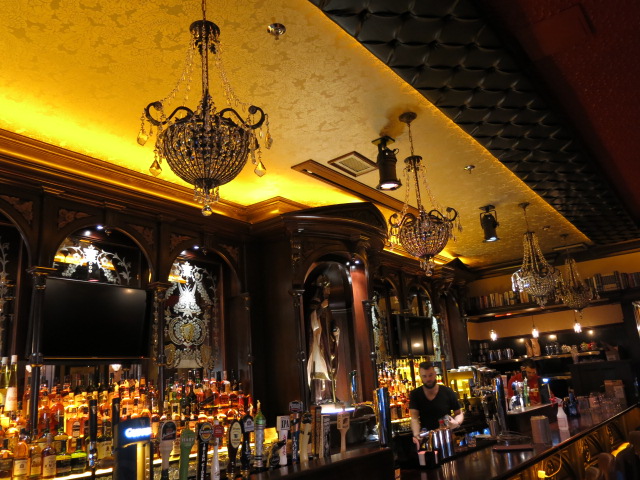 “Opening this January, Rí Rá Georgetown, located at 3123-3125 M Street NW, will be crafted in the warm pub style of 19th and early 20th century Ireland, custom-made with salvaged material straight from Ireland. Each rescued artifact has been carefully restored in County Wicklow, a scenic area just south of Dublin, and then shipped to Georgetown. Co-founders Ciaran Sheehan, David Kelly and team have overseen the restoration of these materials, the essential gems of the Irish pub on both sides of the Atlantic.

Step Through the Doors and Back in Time with Matchless Décor

Walking through the front door of Rí Rá Georgetown, guests will be transported back in time as they enter the beautiful Victorian bar originating from Gerry Nangles Pub from Summer Hill, Dublin. The bar, back bar and key elements on the Victorian bar have been salvaged and restored by master craftsmen over the last six months. Summer Hill has a rich history and this pub would have been considered a “Gin Palace” in its day.

Unfortunately over the years, this area of the city fell on hard times. As a result, the entire block where the pub was located was demolished in 1969. Luckily, the foreman of the demolition crew, Kevin Ryan, held on to the interiors until he passed away in 2006. As guests enjoy cold pints they can reflect on the countless occasions that were marked in Nangles, and the thousands of perfect pints served there over the decades.

Proud and central in the Victorian bar will stand a statue of St. Patrick. He was rescued from a burning building on Patrick Street in Cork, on December 11, 1920. Three hundred businesses and homes were destroyed by fire, amongst them City Hall, The Library, The Munster Arcade, and many more notable buildings where a statue could be housed.

St. Patrick has remained hidden away for the last 90 years until his smoke damaged remains turned up at an estate sale in the city in 2011. Evidence of his ordeal can still be seen even after painstaking restoration work carried out by a specialist team in Ireland, most noticeable his charred staff and smoke blackened cloak.

St. Patrick most recently left his home in Wicklow, Ireland, to begin his exciting journey to the nation’s capital in celebration of the newest Rí Rá location opening in Georgetown.

As guests enter, the theater area to the right has meticulously restored paneling and columns from The Theatre Royal, Hawkins Street, Dublin. Over the years there have been four distinct Dublin theatres called the Theatre Royal. The original was built in 1662 located in Smock Alley and closed in 1787. In 1821, Henry Harris bought as site in Hawkins Street and built a 2000 seat theatre for a cost of £ 50,000. It was renovated and added on to in 1897 and again in 1935. The Theatre Royal, fondly called “The Royal” by Dubliners, was the biggest in Europe at one time, seating 3700 people plus 300 people standing. The theatre closed in 1962 because it wasn’t making enough money. Bob Hope and Julie Garland are among the celebrities who performed at The Royal. The screen cinema and a 12-story office block currently housing the headquarters of Ireland’s Department of Health replaced the theatre. Hawkins Street is located just north of Trinity College and south of the river Liffey in the heart of Dublin.

The Whiskey Room & Bar upstairs features one of the most extensive ranges of Irish whiskeys in America, including a number of rare bottles, as well as some unique to Rí Rá Georgetown.The bar itself and the beautiful cabinets were meticulously restored from Maddigans watchmaker and jeweler on Ellis Quay, Dublin. The sourcing of these elements of the pub were a crucial component for Sheehan, who wanted to tie into the M Street buildings history, as the jewelers shop ‘J. Clinton Tribby.

The paneling for this area of the pub came from the well-known Royal Bank of Ireland on Baggott St. The original bank dated from 1835, closed in 1967 and was demolished in the mid 70’s. It stood between Larry Murphy’s pub and the current Bank of Ireland headquarters. The original building the bank closed in 1967 and was demolished in 1972 to make way for the current office building.” 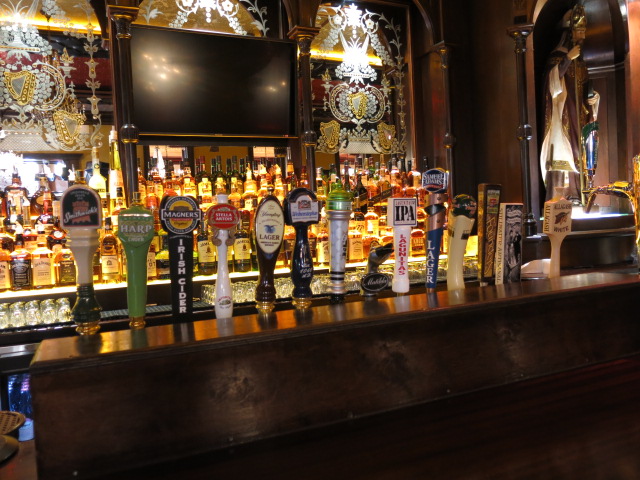 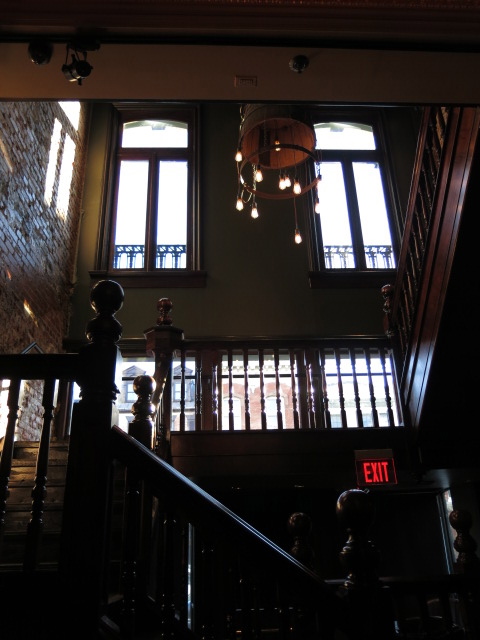 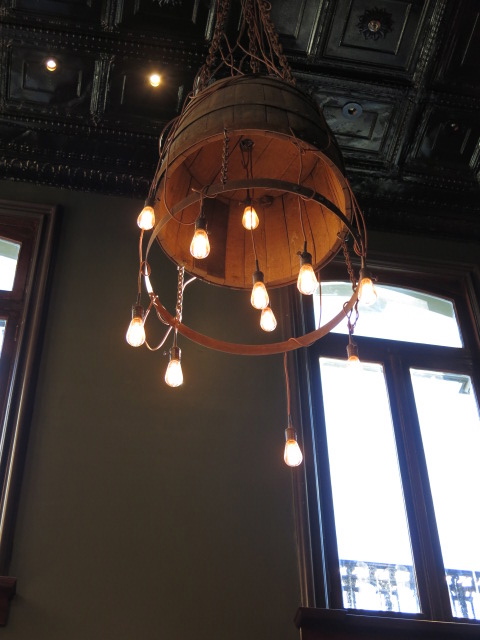 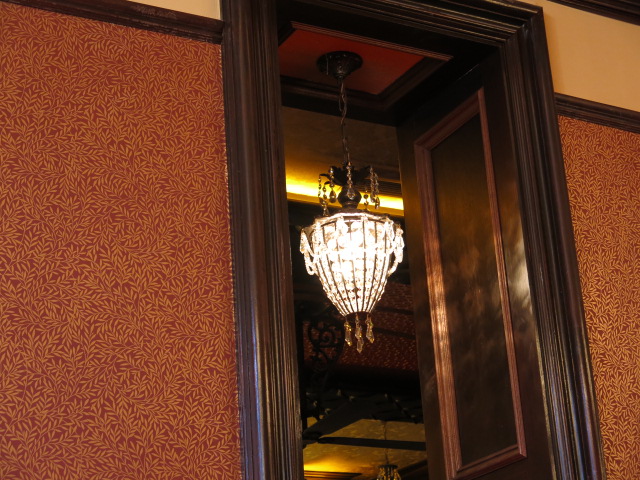 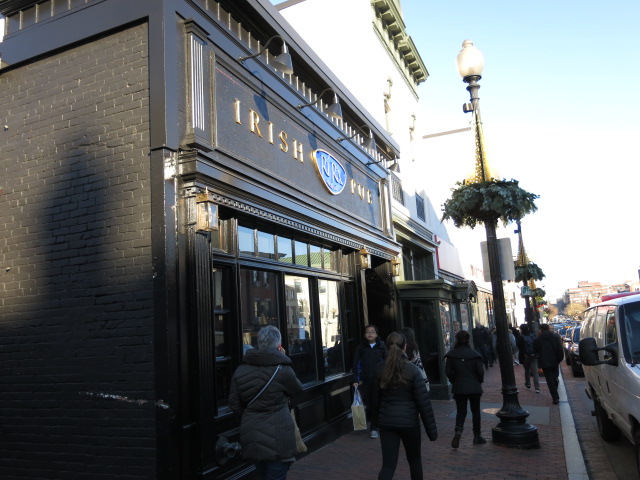