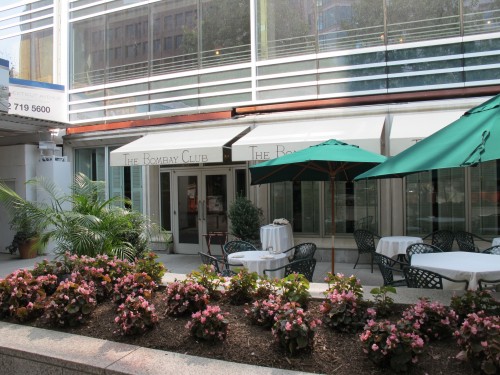 “In January 2014, Ashok Bajaj’s first Washington restaurant, The Bombay Club, located at 815 Connecticut Avenue, NW, a block from the White House, will celebrate a milestone – its 25th birthday. Award- winning restaurateur Bajaj moved to Washington, D.C. in 1988 and opened The Bombay Club that same year. He convinced his landlord that the nation’s capital was ready for a fine dining Indian restaurant. The Bombay Club’s immediate success was the catalyst for Bajaj to build his successful restaurant collection, which includes eight top tier dining establishments in the city.

In commemoration of this special 25th year, The Bombay Club will feature a selection of classic Indian dishes during the month of January. These dishes have rotated on and off the restaurant’s menu since its opening, due to their popularity and requests by frequent guests. At lunchtime guests can enjoy a two-course menu, plus a complimentary Indian petit four for $25 per person, excluding tax and gratuity, (complete menu is posted below). Then, at dinner service, a complimentary glass of champagne will be presented with the entrée course in celebration of the anniversary. The Bombay Club will also observe Restaurant Week, January 13-19th and the featured dishes will be incorporated into these lunch and dinner menus as well.

A selection of new cocktails will also be showcased in January. They are priced from $10 to $12 and include the Mango Bellini, Mango Puree &Sparkling Wine; the Mumbai G&T, Infused Gin, Lime and Tonic; Raj Cup, Pimms Lemon Juice & Soda; Singapore Sling, a very traditional recipe for the 25th anniversary of Port, Lemon Juice and Sparkling Wine, and the Kamla (Lotus Flower), Vodka St. Germain (Elderflower Liqueur), Lemon Juice with a Lemon Sugar Rim and Punjabi Punch, Orange Juice with Spices and Amrut Old Port Indian Rum.

Full menu after the jump.

(Guests choose any two courses for $25 excluding gratuity and tax)