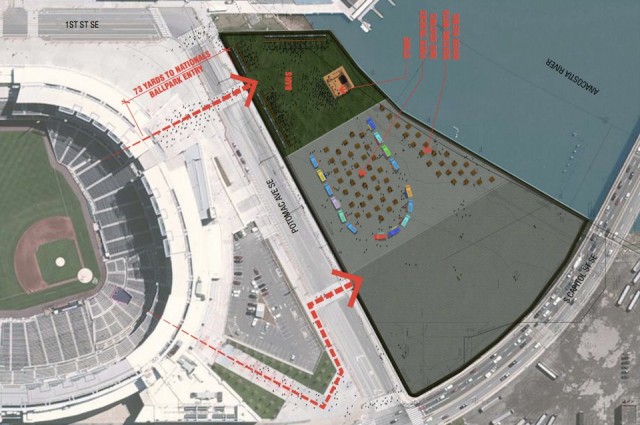 In May a liquor license application was posted for “Riverfront at the Ball Park” located in the lot at 25 Potomac Ave, SE:

“New Tavern, Food will come from various local restaurants nearby traditional and American cuisine. There will be a stage for live entertainment.” 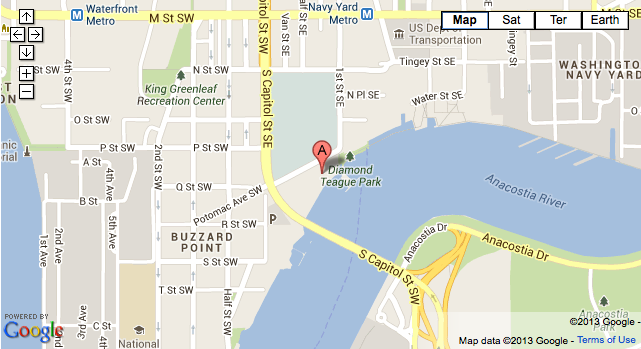 It was narrowly supported by the local ANC:

“Last night, at 12:30AM, a slim majority of ANC 6D finally supported the liquor license and concept for a new temporary outdoor venue just south of the ballpark. The venue will be a partnership of Taste of DC, United Social Sports (frisbee, kickball, bocce leagues), and others, and is planned to activate the vacant lot behind the stadium until it’s developed as soon as next year.”

ABRA has denied the liquor license:

“In this case, the Board determines that no adequate conditions exist that can fix Riverfront’s Application. First, the Board is not confident that MPD has sufficient resources to police the establishment and the surrounding streets during events at Riverfront; especially, when Riverfront is requiring some patrons to come to the establishment from off-site parking areas.

Second, as an undeveloped lot, Riverfront cannot prevent noise generated at the venue from bothering nearby residents. Supra, at 4, 13. Third, based on its proximity to South Capitol Street, S.E., the Board lacks confidence that Riverfront can ensure the safety of pedestrians. Supra, at 43-47. And fourth, the Board is unconvinced that approximately three foot bicycle racks and silt fences sufficiently block patrons from the river bordering the proposed location. Supra, at 4, IS, 21. Based on these issues, the Board lacks confidence that any conditions that the Board could impose would ensure the proposed establishment’s peaceful coexistence with surrounding residents and the safety of patrons and pedestrians.”

Riverfront at the Ballpark – Order on Denial of License (PDF)

Read more →
More Stories
Friday Question of the Day – If You Were in College Today, What Would You Study and Why?Random Reader Rant and/or Revel