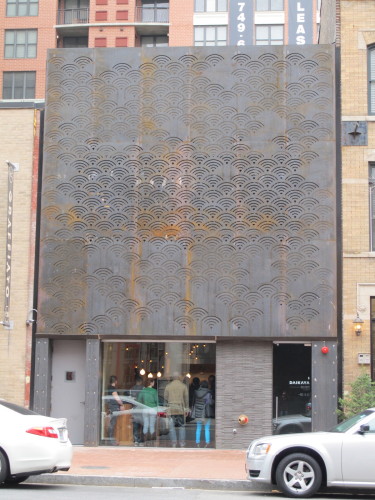 “Daikaya Partners Daisuke Utagawa, Yama Jewayni and Executive Chef/Partner Katsuya Fukushima are pleased to announce the appointment of Lukas Smith as the new beverage director for their award-winning restaurant in the district’s Chinatown neighborhood, steps away from the Verizon Center. Smith brings to his new position experience gained through travel and his work in Washington restaurants, plus time in the wine and beer trade. He spent about 15 of those years crafting libations – including his grandmother’s recipe for Jack Daniel’s highballs, a Smith specialty.

Smith, 35, hails from Lookout Mountain, a landmark that towers over the city of Chattanooga, Tennessee, and runs down through Northwest Georgia. He attended the University of Georgia at Athens to earn his degree in Anthropology and Comparative Literature. Then from 2001 to 2002, he continued his education under a fellowship at Central European University in Budapest, Hungary, where he earned the departmental Thesis Prize en route to a Master’s Degree in Nationalism Studies. Afterwards he returned to Athens to study and teach, which he did for three years while earning a second Master’s Degree in Comparative Literature in 2007. Smith then moved to the nation’s capital in 2008 and began his career working in Washington restaurants including The Gibson and Marvin.

In 2011, Smith became the regional marketing manager for Pabst Brewing Company. Then in 2012, he continued to get well-deserved recognition working at popular restaurants like Cafe Saint-Ex and Bar Pilar. He has been a member of the Daikaya team since its opening working on the beverage program, and crafted several of the restaurant’s most popular cocktail recipes. Guests can anticipate Smith’s menu to be highly innovative and complementary to the restaurant’s innovative Japanese fare. One of his favorite cocktails at Daikaya is the Thieving Magpie, Towari Soba Buckwheat Shochu, Cappelletti Aperitivo, flavored with bitter citrus, and Cocchi Americano Rosa, a roseate cousin of sweet vermouth. This new must-try libation is the perfect complement to Daikaya’s Sapporo-style ramen. The cocktail is served in a mason jar to facilitate ease and safety of service in the bustling close quarters of the ramen shop, and is available exclusively during dinner service for $10.

“The Thieving Magpie is a variation of the classic Negroni cocktail designed especially to marry with the savory flavors of Daikaya’s Sapporo-style ramen,” Smith says. “The cocktail deploys sweetness to balance ramen’s salinity, and bitterness to accentuate its oxidized properties. It is an assertive aromatic complement of citrus and earth to complicate our ramen’s comfortingly warm fragrance.”

In addition, guests can look forward to The Tone and Timbre Old Fashioned, Hibiki 12 Japanese Whisky, Beniotome Sesame Shochu, House “Resonance Bitters,” and lemon peel; The Boris Becher, a refreshing sour cocktail perfect for the colder weather made with Absolut Elyx Single Estate Vodka, Becherovka, Lemon juice, and a drop of Tabasco to highlight Becherovka’s cinnamon spice; Bob Loblaw’s Lob Loy, which highlights the honeyed core of Yamazaki 12, lightened by Dolin Rouge Vermouth and intensified by the bitter elements of Punt e Mes; The Hot Mulled Saké, house Gekkeikan Saké, pomegranate juice, charred spices, and citrus peel, and The Big Kitty cocktail – a riff on the classic Kitty Highball – made with Lambrusco (a bittersweet sparkling red wine), and a house ginger beer tailored to curb the wine’s natural sweetness. The cocktails range in price from $8 to $16, however The Hot Mulled Saké and The Big Kitty cocktail are reduced to $6 during happy hour, which runs Monday through Friday, from 5 PM to 7 PM. Daikaya will also be offering a hot version of all of the whiskey-based drinks on the menu.”