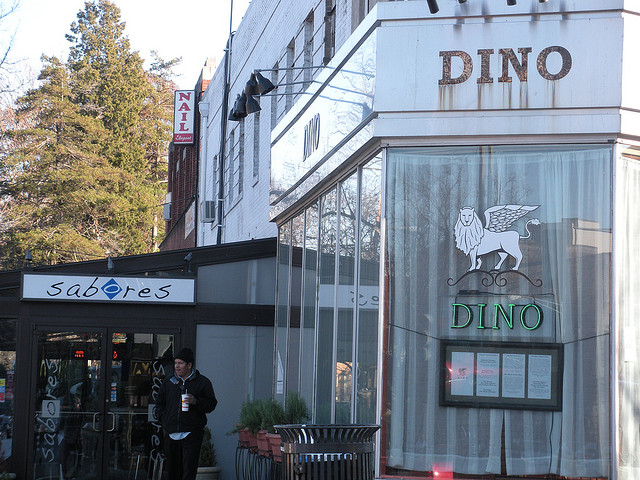 I sort of knew the day would come, but that didn’t make it any less disappointing. Dino Italian restaurant in Cleveland Park is closing. (We have learned a new iteration of the restaurant will open in Shaw).

The news came in a Tuesday email from Dean Gold, the restaurant’s owner/proprietor/comedian-in-chief. The closing date hasn’t been set but will be “in a matter of weeks,” according to the email.

The reason? “We simply are not doing the kind of business necessary to justify keeping our doors open,” Gold wrote.

But who cares, right? Restaurants open and close almost every day in D.C. Some restaurants open, bringing you the “bold flavors of Southeast Asia” or a “modern, refined take on the classic New York delicatessen” or some other line written in culinary P.R.-speak. And others close, because a concept wasn’t working out or a restaurant group wanted to shift their resources elsewhere.

But Dino’s, as it was called, mattered. It was a neighborhood spot in a city that has less and less of them. It had a menu that was interesting, mouth-watering and reasonably priced in a city where such a thing is becoming almost extinct.

Heck, the fact that so many people associated the restaurant with one person says a lot about Dino’s. How often do you walk into a restaurant in D.C. and know immediately who owns, runs and put his blood, sweat and tears into it? Dean Gold was that kind of owner. He’s also the kind of person who sources his menu from local farms not because it sounds good but because he believes it’s the right thing to do.

“The food we eat should be raised & produced by small farms & artisans following sustainable practices,” he writes in his “manifesto.” “We do not believe in better living thru GMOs & intensive factory farming.”

Of course it goes without saying that such culinary “high-mindedness” (others might be less charitable in describing it) has more impact if the food tastes good. In the 15 or 20 times I visited Dino’s over the last five years, I never had a bad meal. I also never left hungry, which, after dining at one of the thousand small-plateries lining the streets of our fair city, is rare for me these days.

In addition to his daily fare and eminently affordable holiday menus (the farewell email advertised a $45, three-course Thanksgiving dinner), Dino’s hosted a bunch of themed dinners throughout the years.

I attended two of them, a ten-course-long celebration of the duck (“Dinner with the Duck”) and a similarly lengthy ode to the Mangalitsa breed of pig. Each meal began with remarks by Dean and the farmer who raised the animals that made our meal possible. The food was served family style, and by the end of the meal (some three hours later), we actually felt like one, big (thanks to the friendly portions) family. These experiences will stay with me, unlike the meals I routinely book on OpenTable, experience and promptly forget.

As a regular customer, I can see why Dino’s struggled. It was probably too big, and definitely did not scream “hip” or “cool.” As such, it was always easy to get a table there on a Friday night with only a fews hours notice — which, while convenient for diners, was never a promising sign in the ultra-competitive D.C. dining scene.

And yet none of that changes the basic facts. Food should be produced ethically. Food should taste good. Food should be prepared and served by people who give a shit, and by an owner who legitimately cares about creating a place that engenders warm, fuzzy feelings in its customers.

Dino’s was all that and more, and it makes me sad to think that it’s going to close without more Washingtonians having been able to experience it.

I wish Dean and his wife, Kay Zimmerman, well on their new endeavor, and to quote the Everything But The Girl song, “Wherever you go, I will follow you.”