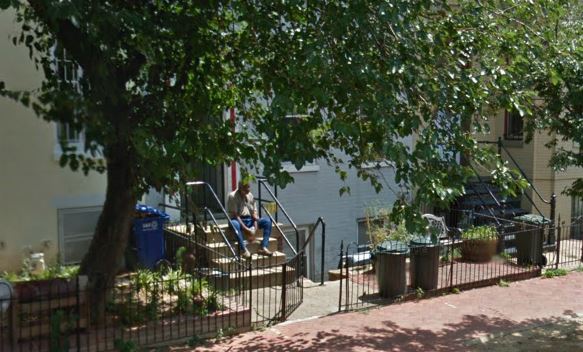 I meant to write about Larry Byrd when I learned of his death in late June at the age of 90.

Larry was the first person I met when I moved into my former home on 4th St. NW, a few blocks east of the Convention Center, in February 2012. “Welcome to the neighborhood,” he said, seeing me lugging boxes up the stairs into the early 20th century row house I shared with several friends.

We chatted for a few minutes. To my surprise, our conversation quickly veered beyond small talk. He asked me about the masters program I was about to begin and my long-term career goals. He told me that he was legally blind, able only to see “orbs.”

He seems like a nice man, I thought. What I didn’t know is that Larry would become more than just a friendly next-door neighbor.

Well into his retirement, Larry spent his days perched on his steps or on a bench just inside his gate. As people walked by, he said hello and offered up one of his trademark phrases, telling people, “Have a wonderful day,” or, “Be good to yourself.”

And the neighborhood loved him. Not only was he a beacon of warmth and friendship, he was known for being a mentor to several men who battled drug addiction.

He had a way of coaching everyone he met. When I told him about my studies and internships, he asked me what I could do to improve or how my experiences could be useful to me down the road. He helped me get better in many aspects of my life, even though he hardly knew me.

When he passed away, our street lost its brightest star. My third residence in D.C., I had never before felt like I really had neighbors or was part of a community. Larry brought everyone together and made our two-block street — from New York Avenue to N St. NW — that community I had always sought.

A few weeks ago, I read a story on Gawker about a man who, using Google’s Street View feature, had spotted his now-deceased grandmother sitting on the stoop of her home. “I thought it was such an uplifting and awesome picture because it showed just how laid back and awesome she was,” he’d originally written on Reddit.

Having left D.C. a few weeks ago, I was feeling a bit nostalgic one recent night and decided to take a look at my old house in Mt. Vernon Triangle. It looked the same as I had remembered (of course). But, looking slightly to its right, it was with great surprise and equal parts happiness and sadness that I spotted my neighbor, my friend, my mentor Larry Byrd sitting on his stoop.

While the photo was grainy, he looked happy and content, soaking up the sun (as he enjoyed doing) and scanning over the street that worshiped him. Knowing Larry, I’m sure he was looking out for a passersby who needed a warm wish or a measure of encouragement.