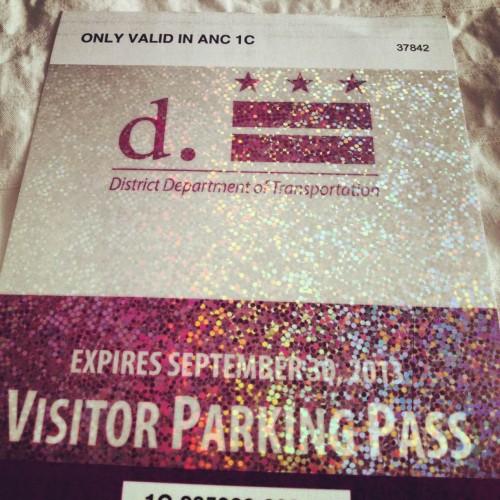 “Today the District Department of Transportation (DDOT) announced it has started to distribute the 2013/2014 Visitor Parking Pass (VPP). The new passes are being distributed via mail to households located in Wards 1, 3, 4, 5 and parts of Ward 6 (H Street and Ballpark District) and DDOT plans to complete the mailing by December.

The residents in these Wards may expect to receive their pass no later than December 2013.

Although the 2012/2013 pass will remain valid through December 2013 residents are reminded to discard their old pass upon receiving the 2013/14 pass.

Households located outside of the 2013/2014 VPP participating area may visit their local police station or substation to request a temporary parking pass.

Questions about the VPP program may be directed to DDOT’s customer service line at 202-673-6813 during normal business hours.

About the Parking Pass Program

The VPP program is designed to allow guests of District residents to park for more than two hours on RPP zoned blocks. A VPP is only valid during the hours of RPP enforcement and in the same RPP zone and ANC boundary as the residence.”