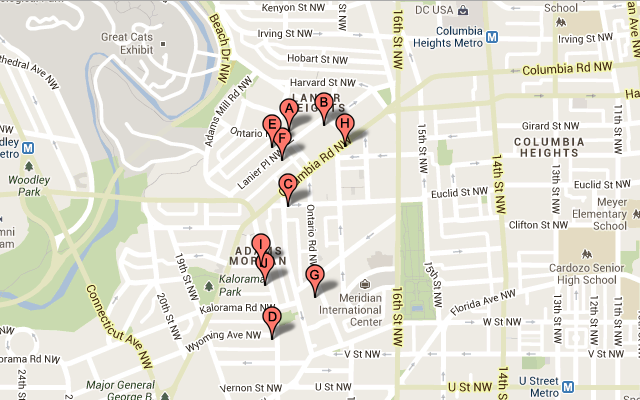 It may never be easier to get up close and personal with the musical talent of Washington than at the first annual Adams Morgan PorchFest when the front stoops and porches of the community will be transformed into intimate performance spaces to be enjoyed by anyone who happens to stroll by. And it’s free!

Inspired by similar Porchfest events across the country aimed at creating a family friendly, neighborhood-based alternative to the nightclub music scene, Adams Morgan’s version will span an eclectic range of styles from Brazilian, Irish and jazz, to indie rock, children’s music and even Egyptian Nubian folkloric(!)

“Adams Morgan has a rich musical heritage, and many of our residents are working musicians —PorchFest is a family friendly way to share their talent with the community,” said Kristen Barden of the Adams Morgan Partnership BID.

“PorchFest is exactly the kind of grassroots arts event that brings people and neighborhoods together— and the tree lined side streets and architecture of Adams Morgan will only complement the performances. We are delighted to partner with the Adams Morgan Partnership BID to bring art out and into the streets,” said Steve Shulman, executive director of Cultural Tourism DC.

“We made our porch available even though we didn’t know what kind of music would be played, or who would be playing, but because it sounded like fun. Free music for the people – who wouldn’t support that?” said Adam Crain, owner of Adam’s Inn.