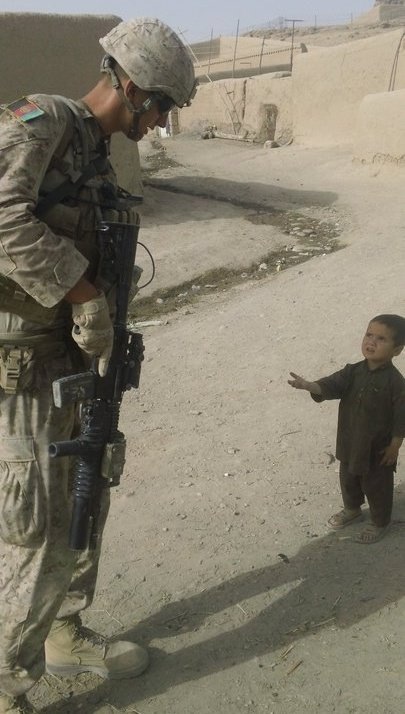 For those with security concerns about the letter – From the OP:

“The action is over and everyone is back to base. The emails from base are vetted – even to family. So he would not have been able to send it if it had any tactical information. And clearly he is not mentioning any positions – just slogging up and down mountains and getting shot at. There is no mention of the number of troops involved, specific units etc. nor any of the US weapons or tactics used. They are not allowed to tell anyone anything about where they are about to be sent or what they are about to do, but after an action it is allowed, again without compromising specifics.”

As we’ve been obsessing about the govt. shutdown here, it might be interesting to get a glimpse of the world outside – far outside. I just got this email from my nephew. He’s 25, on his 3rd tour in Iraq and Afghanistan. Written in such a plain, “just the facts” tone, you have to take a minute to think about what this whole experience was really like. Most of us have only experienced altitudes of 9,000 feet on a ski vacation, carrying little more than a sandwich and a water bottle. We complain about the noise of early construction work, not incoming mortar rounds.”

Hey Dad! It was very nice to talk to you yesterday, and thank you for the lowdown on the home front, it is much appreciated. Here is an update of just our last week here in Afghanistan. As you know we returned to Shank a few days ago, however on our trip back we took a little detour. We conducted one of the largest and hardest missions physically of my career, in a valley known as the Tenga. It is top 5 most dangerous places in the world. The Afghan National Army had a mission to clear the entire valley. Our platoon went on a 12K movement into the mountains on the southern side skirting the valley to set up an over watch position of the valley to support the Afghan Army. I am 1st Squad Leader so therefore led the Platoon with my squad to the OP. It was hands down the most challenging thing I had ever done physically.

The land navigation proved simple more or less, however we were at about 9,000 feet and had to climb over mountains with over 140 pounds worth of gear to reach our final position. We were completely physically and mentally exhausted. Upon reaching our spot we received incoming 82MM mortar rounds and 50Caliber machinegun fire witch were set up in offensive positions intended for the Afghan Army. Our JTAC immediately called in for air assets, he dropped a lot of bombs so to say. We ended up killing multiple Jackpot key Taliban leaders and took out a key HIG weapons Cache witch had a lot of enemy weaponry. We took 0 casualties. We walked out of there rucking back over 8 1/2K, to DSP Saidabad, also known as DSP Alamo. My previous home with the ODA Special Forces. The mission was a huge success. The HIG and the Taliban ended up fighting each other due to the fact they both though one of the other had told U.S. forces where they were set up to attack the Afghans. Any way that’s just a taste of what I have been up too.

I am back at FOB Shank now witch is a huge relief, I no longer have to be shot at or hear rockets and mortars whizz over my head. We should be returning back to fort Stewart around the 13th of November. I can not wait to see you all at Thanksgiving.