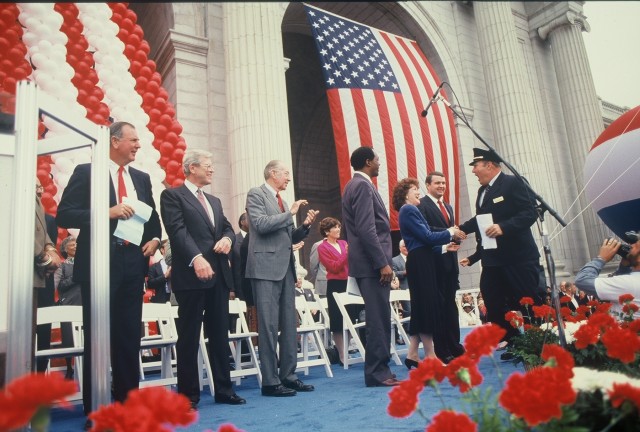 “On September 29, 1988, Washington Union Station reopened its doors with a gala celebration after a three-year transformative rehabilitation project. A collaborative public/private partnership funded the $160 million project per 1981 congressional legislation to restore the station to its historic grandeur. At the time, the project was considered the largest, most complex, public/private restoration project ever to be completed in the United States. Key improvements included: the creation of a mezzanine level within the Concourse, which provided expanded retail; the addition of dedicated areas for Amtrak seating and signage; restoration of the floors in the West, East, and Main Halls and exterior walls, doors, and windows; upgrades to the exterior lighting; the addition of two escalators connecting the ground level and mezzanine level outside the Main Hall; and the addition of an elevator providing accessibility to all three levels of the station.

In 2012, Amtrak and private developer, Akridge, released the Washington Union Station Master Plan in partnership with USRC, the commuter railroads, and other local stakeholders. The plan sets forth a new vision to again revitalize the station through a multi-phased approach, to gain increased passenger and rail capacity, add new station amenities and transit-oriented mixed-use development above the tracks. While work continues to refine the plan, early action items focus on passenger waiting areas and concourse expansion.”