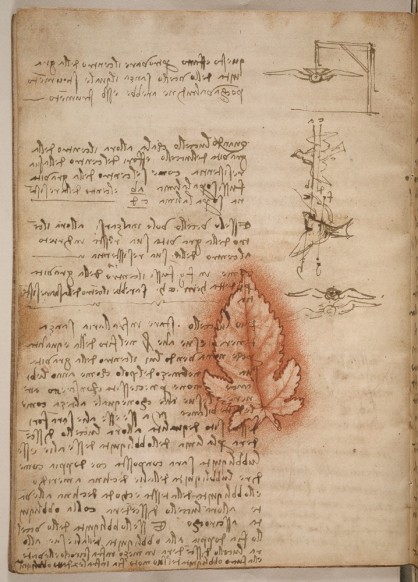 From the Air and Space museum:

Admission is free, but timed tickets are required during the first week (September 13 through 19).

You may obtain free timed tickets at the Lockheed Martin IMAX Theater or the museum store outlet inside the Independence Avenue entrance.

To reserve timed tickets in advance, call (866) 868-7774 or order tickets online. Service fees apply to advance online and phone orders. Please check this website for changes to this policy.

Leonardo da Vinci created masterpieces of art and sculpture. Equally remarkable, his aggregate achievements in engineering, mathematics, anatomy, geology, physics, music, military technology, aeronautics, and a wide range of other fields, not only stood without peer in his own time, but were strikingly prescient for the distant future. He recorded his forward-looking ideas in thousands of notebook pages, known as codices. He produced one codex entirely on flight in 1505-1506, the Codex on the Flight of Birds.

Among the many subjects Leonardo studied, the possibility of human mechanical flight held particular fascination. He produced more than 35,000 words and 500 sketches dealing with flying machines, the nature of air, and bird flight. In the Codex on the Flight of Birds Leonardo outlined a number of observations and beginning concepts that would find a place in the development of a successful airplane in the early twentieth century.

Hundreds of years before any real progress toward a practical flying machine was achieved, Leonardo expressed the seeds of the ideas that would lead to humans spreading their wings. This extraordinary document, exhibited outside of Italy only a few times, will be displayed in The Wright Brothers & The Invention of the Aerial Age gallery. The Codex exhibit will be a once-in-a-lifetime opportunity to appreciate the genius of da Vinci in the same space as the Wright Flyer, which made the airplane a reality four centuries after the Leonardo produced the Codex on the Flight of Birds.”