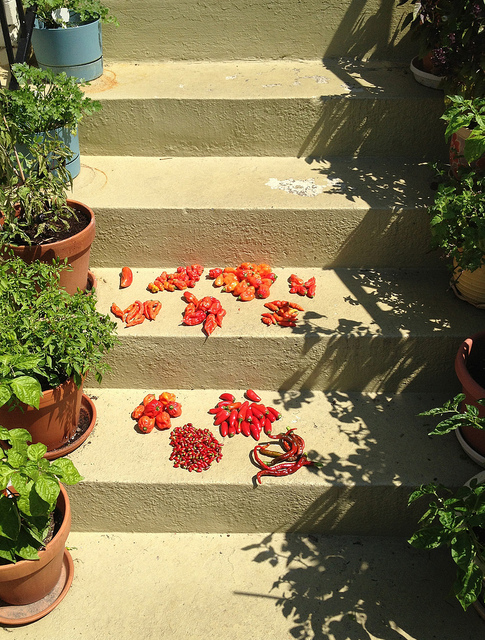 “After last week’s photo of the Trinidad Scorpion, I thought I’d share this week’s pepper haul from our garden in Stronghold. All summer we’ve been making hot sauces and salsas from some of the world’s hottest chillies, and boy are they hot. From top to bottom and left to right: a lone sweet pepper, orange 7 pot, habanero, naga morich jolokia, red bhut jolokia, Trinidad scorpion, another naga bhut jolokia, red savina, jalapeño, Thai chillies, and cayenne. Most of these will get smoked tomorrow and made into hot sauce this week! We also have Caribbean red, paper lantern, wiri wiri, yellow 7 pot, and paprika, but those weren’t in the harvest this week.

As you can see, we have a ton of these things, some of which can be considered fairly rare, and all of which seem to be doing just fine in the DC climate (except for the douglah pepper, which grew into a stunted little bush and never flowered). If anyone would like to do a seed exchange, we’d be happy to trade, and not necessarily for hot peppers. We’re particularly interested in good, heirloom varieties of tomatoes, eggplant, bell peppers, and other edible goodies. Contact me at andyhkeller at gmail, and we can work out an exchange.” 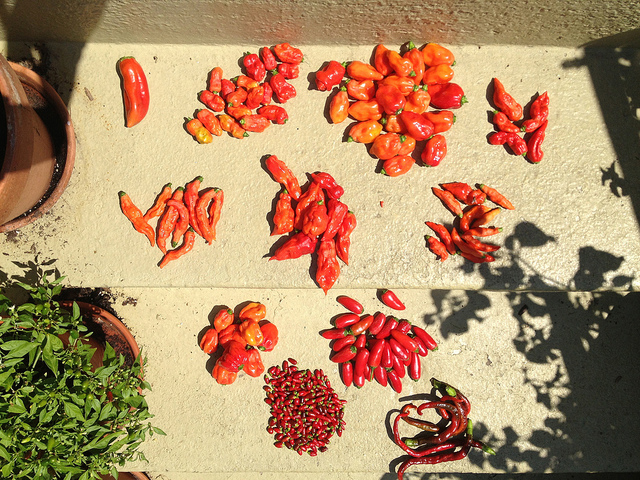